BY Heather Hughes on April 6, 2019 | Comments: one comment
Related : Soap Opera, Spoiler, Television, The Bold and the Beautiful 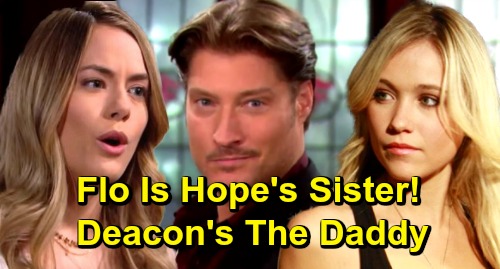 The Bold and the Beautiful (B&B) spoilers tease that Shauna Fulton (Denise Richards) will backtrack after an important declaration. She’ll initially insist that Bill Spencer (Don Diamont) is Florence “Flo” Fulton’s (Katrina Bowden) father, but she’ll later admit that may not be true. Shauna really got around in her younger years, so she’ll concede that she could be mistaken.

Nevertheless, both Quinn Forrester (Rena Sofer) and Shauna will agree that their kids should know what’s up. There’s a possibility they could be half-siblings, so it’s a good idea to go ahead and fill them in. The Bold and the Beautiful spoilers say they’ll start with Wyatt Spencer (Darin Brooks). He’ll be horrified when he realizes he may have been madly in love with his sister in high school.

Since it turns out Shauna and Bill only had a one-night stand, Wyatt will just hope a different hookup resulted in Flo’s conception. Flo should be shocked and disturbed by Shauna’s news as well, but she’ll hope the same thing. Of course, the fact that Shauna’s doubting it probably means someone besides Bill was the “baby daddy.”

Besides, what kind of mystery would this be if they just went with the first option? If Bill is eliminated as a father candidate, B&B will have to explore other possibilities. There could be a clue coming up in the storyline itself. The Bold and the Beautiful spoilers say Hope will become a bit obsessed with Flo. She’ll feel like they should be friends due to the baby losses they’ve endured.

Flo never really gave birth, but Hope doesn’t know that. She assumes Flo also went through the pain of losing a child, just in a different way. Hope will want to develop a real bond with Flo, but Flo’s guilt will intensify. She’ll feel like she has no choice but to push Hope away. Flo will fear she’s going to crack if she doesn’t stay away from Hope.

Naturally, this could lead B&B to create a scenario where Flo pretty much has to spend time with Hope. Making them sisters would do the trick. Perhaps there’s still a chance Deacon Sharpe (Sean Kanan) is Flo’s biological father. Hope would pressure Flo even more if they’re revealed as half-siblings.