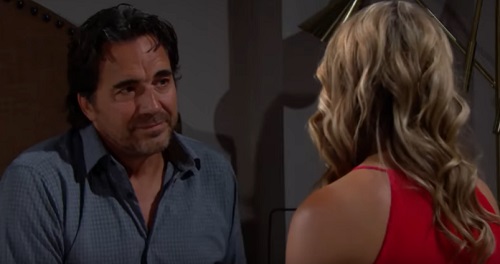 The Bold and the Beautiful spoilers tease that Shauna Fulton (Denise Richards) will be feeling determined. As B&B viewers know, she recently spent the night with Ridge Forrester (Thorsten Kaye) after he drank way too much at Bikini Bar. Nothing intimate happened between the two, other than a kiss that Shauna stole from Ridge while he was unconscious, but that kiss really seemed to mean something to Shauna. As she later told her daughter Flo Fulton (Katrina Bowden), she had a great evening with Ridge, and now she can’t get him out of her mind.

It certainly looks like Shauna is going to be an ongoing presence in Ridge’s life. He may be thinking that the evening between them was just a one-time interaction and that he won’t be seeing much of Shauna from here on out, but Shauna will definitely have other ideas. According to B&B spoilers, Shauna will set her sights on a man this fall, and it certainly looks like that man will be Ridge. And something tells us that when Shauna gets determined about something, she won’t give up.

But what could bring Shauna back into Ridge’s orbit? Well, we can’t forget that Katie Logan (Heather Tom) is currently facing a huge health crisis. According to B&B spoilers, her family will soon learn that Katie is in total kidney failure and needs a transplant. She’ll need a donor, and it’s certainly looking like Flo, her niece, will end up being her donor. And if that’s the case, then Flo and Shauna’s interactions with the Forrester and Logan families are far from done.

But it would certainly be a complicated situation. Brooke Forrester (Katherine Kelly Lang) absolutely can’t stand both Flo and Shauna. She won’t soon forget how Flo kept Hope Logan (Annika Noelle) and Liam Spencer (Scott Clifton) apart from their daughter Beth Spencer (River Davidson and Madeline Valdez). And she’s appalled that Shauna actually encouraged Flo to keep the secret about Beth’s existence, all for personal gain.

So, if Flo does end up being Katie’s kidney donor, that means that both Ridge and Brooke will come into direct contact with both Flo and Shauna, and they’ll owe Flo their gratitude for saving Katie’s life. And given that Shauna is really into Ridge right now, she’ll probably use the situation to her advantage to try to spend a little extra time around Ridge – something that Brooke may notice and surely won’t like.

At any rate, look for Shauna to insinuate herself into situations where Ridge is present going forward. According to B&B spoilers, she’ll even tell him that this is just the beginning of her being in his life. And that can only mean one thing…that a new love triangle is brewing. After all, Ridge has already flashed back to his night with Shauna, and he seemed genuinely touched by her generosity and support.

But could Ridge actually start to become attracted to Shauna? We think there’s a good chance that he will, despite himself. After all, he and Brooke are having a difficult time right now dealing with their disagreement over Thomas Forrester (Matthew Atkinson), while Shauna is offering her full support to Ridge. That sounds like a recipe for a love triangle to us!

Do you think that Ridge will start to grow attracted to Shauna? Stay tuned to the CBS soap and don’t forget to check CDL often for the latest Bold and the Beautiful spoilers, updates, and news.