BY hellodrdavis on May 6, 2019 | Comments: one comment
Related : Soap Opera, Spoiler, Television, The Bold and the Beautiful 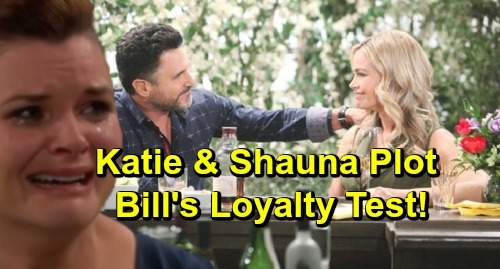 The Bold and the Beautiful spoilers tease that Katie Logan (Heather Tom) will be having mixed feelings. She turned down Bill Spencer’s (Don Diamont) proposal of marriage in haste, then later regretted it. But when she went to find Bill and reverse her decision, she found him drinking with Shauna Fulton (Denise Richardson). Of course, there was nothing untoward going on between Bill and Shauna, but the scene gave Katie pause.

But instead of giving up on Bill and considering him a lost cause, she’ll devise a plan, and she’ll enlist Shauna to help. Of course, Katie’s got two big reservations when it comes to getting back together with Bill. One is the effect it would have on Will Spencer (Finnegan George) if things don’t work out. And the other is that Bill tends to get interested in other women fairly easily.

After witnessing Bill and Shauna together, Katie will want to be sure that Bill is really interested in her and only her. So, she’ll have a chat with Shauna and the two of them will hatch a plan. Exactly what they’ll plan remains to be seen, but it certainly looks like they’ll set some traps for Bill.

Since the plot will involve Shauna, it’s probably the case that Shauna will try her hand at flirting with Bill. Of course, the goal here will be to see whether Bill takes the bait, or whether he’s really committed to Katie. They may videotape the flirting attempts to catch Bill flirting back if he’s so inclined, or perhaps Katie will be watching in the wings while the flirting ensues.

Whatever the case, it will be a pretty devious plot. Shauna will get to put her seduction skills to the test, and Katie will get an eyeful, but what will happen when Bill finds out about the scheme? Bill’s a pretty sharp guy, and he might be able to figure out what’s going on when Shauna starts laying it on thick.

Chances are, Katie and Shauna will get busted big time. Plots like this usually don’t go undetected, and Katie will probably end up with egg on her face. it will be interesting to see how Bill reacts to the whole thing, especially if he ends up suspecting that something’s up when Shauna starts flirting.

Do you think that Bill will pass Katie’s loyalty test? Stay tuned to the CBS soap and don’t forget to check CDL often for the latest Bold and the Beautiful spoilers, updates, and news.