The Bold and the Beautiful Spoilers: Shauna Steps Up For Ridge, Replaces Brooke After Lies About Thomas Exposed 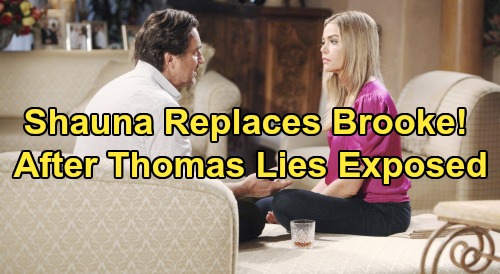 The Bold and the Beautiful (B&B) spoilers tease that Ridge Forrester (Thorsten Kaye) will get a huge shock. As B&B viewers know, Brooke Forrester (Katherine Kelly Lang) has kept a huge secret from him. She knows that Hope Logan (Annika Noelle) had an altercation with Thomas Forrester (Matthew Atkinson), during which a terrible accident occurred. Hope pushed Thomas and he fell into what appeared to be a vat of hydrofluoric acid.

Well, according to B&B spoilers, it will turn out that Thomas is alive and well, and he’ll return to Hope with a vengeance. He’ll know what she thinks she did to him, and he’ll know that she conspired with Brooke to hide it in order to save herself. It looks like Thomas will ultimately have quite a showdown with Hope as he reveals that he survived and knows what Hope did.

This will of course have ramifications for Hope, but it will also have serious ramifications for Brooke and her relationship with Ridge Forrester (Thorsten Kaye). According to B&B spoilers, Thomas will not only have a showdown with Hope, but he’ll have words with Brooke as well, as he taunts her to tell Ridge what she did. He’ll know that she urged Hope to keep quiet about his terrible accident, and he’ll also know how Ridge will likely react to that bombshell.

Well, according to B&B spoilers, it will indeed be a bombshell for Ridge. He’ll be horrified that Brooke knew that something terrible had happened to Thomas and didn’t immediately tell him about it. In fact, it appears that he’ll either end things with her or seriously consider ending things for good, since he’ll seek Carter Walton’s (Lawrence Saint-Victor) legal assistance. It will be a bad for “Bridge,” since Brooke’s secret will likely be the last straw for their marriage.

But Ridge will have a friend throughout all of this. The Bold and the Beautiful spoilers say that he’ll turn to Shauna Fulton (Denise Richards), who will offer him support and friendship as he reels from the news about Brookes lie and coverup. You’ve got to give Shauna some credit here, since she has really seemed to hold back from aggressively pursuing Ridge and coming on strong. Instead, she’s offered him quiet support without making him feel uncomfortable.

B&B spoilers indicate that Shauna will do a little flirting with Ridge, but it appears that she’ll restrain herself and instead reassure Ridge that he’s a good father and that he’s not wrong in supporting his son. In this way, she’ll give Ridge something that Brooke just can’t give right now, and Ridge will be truly grateful.

It certainly looks like Shauna has played her cards right throughout this ordeal – she’s offered love and comfort while sitting back and allowing Brooke to essentially destroy her own relationship with Ridge. It doesn’t seem like there will be any coming back from this for Brooke at this point, whereas Shauna seems to have carved out a special place in Ridge’s life.

Do you expect that Ridge and Shauna will be together soon, now that it seems “Bridge” is over? Stay tuned to B&B and don’t forget to check CDL often for the latest Bold and the Beautiful spoilers, updates, and news.