The Bold and the Beautiful Spoilers: Should Brooke Be Blamed for Thomas’ Cliff Fall – B&B Fans at War on Social Media

BY Heather Hughes on August 24, 2019 | Comments: one comment
Related : Soap Opera, Spoiler, Television, The Bold and the Beautiful 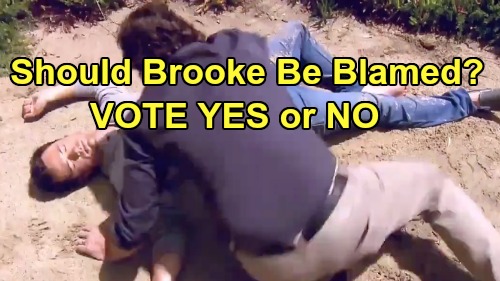 The Bold and the Beautiful (B&B) spoilers reveal that the CBS soap’s latest cliffhanger is causing a fierce social media debate. B&B fans watched as Brooke rushed over to defend Hope Logan (Annika Noelle) from Thomas Forrester (Matthew Atkinson). She got between them to break up the conflict, but Thomas made another move. That brought Brooke’s shove and sent him cartwheeling off the cliff’s edge.

Ridge Forrester (Thorsten Kaye) will blame Brooke in the week ahead, but does she deserve it? Many Bold and the Beautiful viewers can’t seem to agree on that! B&B managed to muddy the waters a bit by making Thomas somewhat less threatening than usual. He genuinely seemed to want a chance to explain and tell Hope how sorry he was. Thomas wasn’t as menacing as we’ve sometimes seen him.

Even so, Brooke had to act fast based on what she saw and heard. It was clear that Hope was in distress, and she had every reason to be based on Thomas’ behavior lately. After what went down just after “Phoebe Forrester” was revealed as Beth Spencer (River Davidson and Madeline Valdez), Hope knew things could get dangerous. She was terrified and Brooke did see Thomas with his hands on her.

From Brooke’s perspective in these tense moments, she viewed Thomas as a threat. It also seems obvious Brooke didn’t mean for Thomas to go over the cliff. She certainly intended to shove him, but that doesn’t mean she wanted him to fall and die. Brooke just wanted Thomas to get away from Hope.

Still, you could argue that maybe Brooke should’ve been a little more careful since there was…you know…A CLIFF. On the other hand, Thomas shouldn’t have followed Hope and made such a scene there. He should’ve respected Hope’s decision not to talk, which she was most definitely entitled to. Thomas was arguably just as responsible for not walking away, especially when Brooke appeared.

It’s a complicated situation that Bold and the Beautiful fans have some strong opinions on. On Twitter, people have been riled up. Some are defending Brooke and others are raking her against the coals. If we’re being honest, your stance on this may depend on how you view Brooke in general!

One B&B viewer tweeted, “Mama to the rescue! Brooke wasn’t playing games today! She gave Thomas a warning but he didn’t listen!!!!” Another insisted B&B should “send Brooke to jail” and added the hashtag “#ByeFelicia.” “Thomas wasn’t doing anything threatening when Brooke pushed him,” a different viewer argued. One more fan disagreed saying, “Brooke was absolutely right to push him away…”

As you can see, there are very mixed opinions on this cliff faceoff. Do you agree Brooke was just protecting Hope or do you think her reaction was over the top? We’ll give you updates as other B&B news comes in. Stay tuned to the CBS soap and don’t forget to check CDL often for the latest Bold and the Beautiful spoilers, updates and news.