The Bold and the Beautiful Spoilers: Should Hope Be Blamed for Thomas’ ‘Death’ – B&B Fans Weigh In On Deadly Shocker 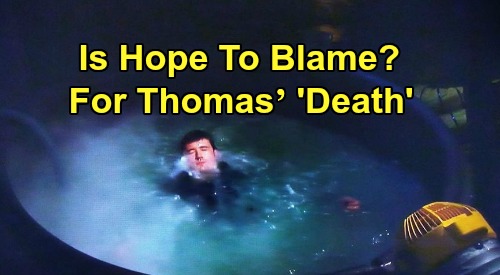 The Bold and the Beautiful (B&B) spoilers tease that Hope Logan (Annika Noelle) will have quite a mess on her hands due to Thomas Forrester’s (Matthew Atkinson) latest fall. We say latest since it hasn’t been that long since Thomas went tumbling off a cliff! It’s clear that Thomas, ledges and Logan women are a recipe for disaster.

When Brooke Logan (Katherine Kelly Lang) shoved Thomas and sent him cartwheeling down onto the rough beach terrain, it caused quite a debate among B&B fans. Some viewers felt Brooke was justified since she feared for Hope’s safety. Others felt like Brooke used excessive force – especially since they were standing somewhere so dangerous.

The Bold and the Beautiful has delivered a situation that’s awfully similar now. Like mother, like daughter! Hope was the one doing the shoving this time around, but there are still fans on both sides of the issue. Viewers have definitely been fired up on social media, so we want to know what you think. Is Hope to blame for Thomas’ death – or “death” as it’ll probably turn out to be?

Even though this demise probably isn’t going to stick, it’s worth considering Hope’s guilt or innocence. Let’s look at some Twitter comments and see how fans are feeling. “Hope is not the victim here,” one B&B watcher insisted. “She played with the emotions of a mentally unstable guy because of her obsession with a kid who is not even hers. Hope is to blame for all of this and she should pay.”

Other fan said, “People need to stop coming for hope because Thomas got what he deserves…” One more viewer argued, “Here’s the thing, even though it was an accident Hope should still notify the police just as Thomas should have done with Emma. So if you blasted Thomas for Emma, you should also do so for Hope. Just saying…”

“Hope shouldn’t be around Douglas after she pushed his father in the acid,” said another fan. Clearly, this is a hotly debated topic that’s bringing out some strong opinions! No matter where you stand on the matter, The Bold and the Beautiful spoilers say the storyline should bring some wild twists. Since Thomas probably survived his vat fall, he may make Hope suffer for the shove and the secret that’ll follow.

It sounds like some exciting drama’s ahead. Do you blame Hope for Thomas’ fall? Do you think she was just protecting herself or should she be held responsible? We’ll give you updates as other B&B news comes in. Stay tuned to the CBS soap and don’t forget to check CDL often for the latest Bold and the Beautiful spoilers, updates and news.