BY Kinsley Goldman on July 3, 2019 | Comments: one comment
Related : Soap Opera, Spoiler, Television, The Bold and the Beautiful 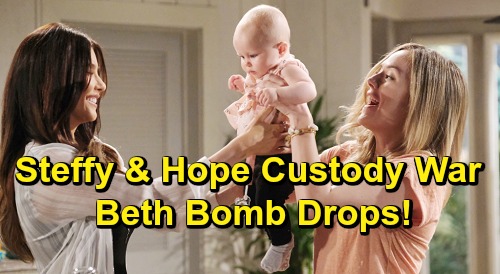 The Bold and the Beautiful (B&B) spoilers tease that a fierce battle is brewing. Hope Logan (Annika Noelle) has grieved the loss of Beth Spencer for months, but Beth’s alive and well in Steffy Forrester’s (Jacqueline MacInnes Wood) home.

Of course, Steffy doesn’t know the adoption’s illegal. While Hope’s been mourning, Steffy’s been bonding with the child she believes is hers forever. She’s sure to be devastated when she realizes “Phoebe Forrester” (River Davidson and Madeline Valdez) is actually Beth. Let’s consider what’s going to happen after The Bold and the Beautiful’s big reveal.

Hope Logan Will Be Overwhelmed With Emotion And Angry

After everything Hope’s been through since Beth’s “death,” she’s bound to be overwhelmed by her emotions. Baby swap plot like this are a popular soap trope and the result is always the same: a raging parent who’s furious over the time he or she was robbed of. Hope will certainly be glad to know the truth, but anger will still be on full display once this B&B bomb drops.

There are plenty of people to be angry with since we’ve got a whole secret circle. No one had the guts to speak up – except for poor Emma Barber (Nia Sioux) who met a tragic end. That’ll only add to Hope’s rage toward Thomas Forrester (Matthew Atkinson) and everybody else involved. Steffy will also face some of this rage – especially if she joins the secret club before the shocker’s exposed.

Even if Steffy remains completely innocent and doesn’t know the truth until Hope does, Hope will be too furious to think clearly. The real issue may arise if Steffy insists on some type of transitional period for “Phoebe’s” sake. Steffy will be awfully attached to “Phoebe.” It’s tough to believe she’ll hand the baby over without any kind of fight.

Steffy may insist that she’s the only mother this little girl has ever known. She might plead with Hope for more time and suggest that it’s what’s best for “Phoebe.” However, Hope may not agree on that. It’s easy to imagine Hope ranting about how she’s Beth’s mother and deserves to be with her immediately. She’ll likely feel like Steffy’s already had more than her fair share of time with the kid.

Naturally, Liam Spencer (Scott Clifton) will be caught in the middle of all this. This could set up quite a custody battle. Hope could feel so cheated by Reese and Flo that she takes it out on Steffy. She may turn against Liam as well, especially if he sides with Steffy for the most part.