The Bold and the Beautiful Spoilers: Steffy Freaks Over Adopting A Logan Baby – Liam and Hope Drop Flo Paternity Bomb 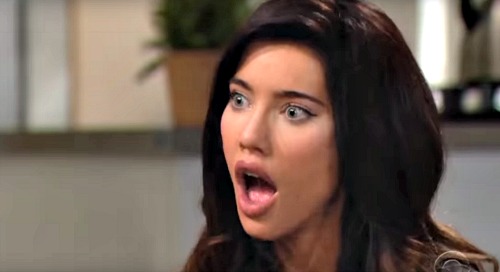 The Bold and the Beautiful (B&B) spoilers tease that Liam Spencer (Scott Clifton) will get stunning updates from Hope Spencer (Annika Noelle). After Florence “Flo” Fulton’s (Katrina Bowden) father drama winds down, Hope will fill Liam in on the truth. She’ll pass along the news that Storm Logan (William deVry) is Flo’s bio dad and leave Liam surprised by the connection.

Naturally, this info complicates the birth mom situation. In fact, it makes a bigger mess than Liam and Hope could even imagine! Nevertheless, they’ll only be able to work with what they know so far. Hope and Liam just think Flo let Steffy Forrester (Jacqueline MacInnes Wood) adopt her baby. They have no idea that Flo was part of Dr. Reese Buckingham’s (Wayne Brady) Beth Spencer scheme.

Nevertheless, B&B fans will see some worries for “Lope.” They’ll be concerned about how Steffy’s going to react to Flo’s father shocker. The Bold and the Beautiful spoilers say they’ll believe “Phoebe Forrester” (Isabella de Armas and Redford Prindiville) is a Logan family member through Flo. She’s actually one through Hope, but the link itself is what’s crucial right now.

Steffy could be wary when she learns her adopted baby’s birth mom has such close ties. She won’t want Flo trying to pull anything – or the Logans trying to pull anything for that matter. Liam and Hope will realize they’ll have to tackle this carefully. They’ll have an important discussion about when Steffy should find out and how the information should be presented to her.

The Bold and the Beautiful spoilers say “Lope” will ultimately settle on a plan. They’ll know Steffy has to hear about all this at some point. They can’t just sit back and let gossip circulate until it reaches Steffy. Liam might decide it’d be best to tell Steffy himself in person. That way he could offer reassurance that no one’s coming for “Phoebe” and argue that this baby’s her daughter forever.

Of course, things will inevitably change down the road! “Phoebe” will be exposed as Beth sooner or later, so heartbreak will hit Steffy hard. We’ll keep you posted as other B&B details emerge. Stay tuned to the CBS soap and don’t forget to check CDL often for the latest Bold and the Beautiful spoilers, updates, and news.