The Bold and the Beautiful Spoilers: Steffy Forced To Give Up Beth, Family Future Revealed – Devastated Mom Seeks Replacement Baby? 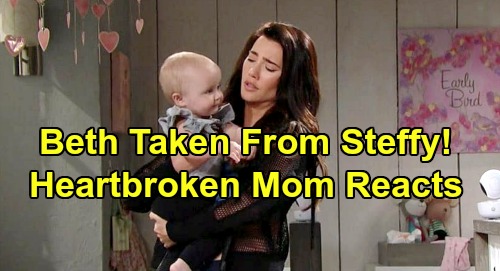 The Bold and the Beautiful (B&B) spoilers tease that Steffy Forrester (Jacqueline MacInnes Wood) will have to accept what she can’t change. Like Hope Forrester (Annika Noelle), Steffy was duped and is a victim in all this. She believed she was adopting “Phoebe Forrester” (River Davidson and Madeline Valdez) legally, so she embraced life with Kelly Spencer (Zoe Pennington) and her precious little sister.

Once Hope takes back Beth Spencer, Steffy will face total devastation. She’s definitely in for a rough time here. The Bold and the Beautiful spoilers say Steffy will need a chance to mourn the loss and reevaluate things. She’ll feel like a piece of her is missing after “Phoebe” vanishes from her life.

However, Steffy will eventually accept that “Phoebe” was never hers to keep and move forward. How exactly will Steffy pull that off? Will she handle this crisis in a healthy way or an unhealthy one? B&B fans will be curious to see what Steffy’s family plans are after the drama winds down. Giving up “Phoebe” will be a difficult blow, but Steffy could still have more kids in the future.

Let’s consider Steffy’s options. She could pursue a legal adoption and try to bring a kid into her life who genuinely needs a loving home. The ordeal with “Phoebe” might be an issue if Steffy pursued this path in the real world, but it wouldn’t matter much on a soap. Steffy was deceived by Reese Buckingham (Wayne Brady), so there’s no reason she can’t pursue a legit adoption this time.

Of course, Steffy could also get pregnant – either by Liam Spencer (Scott Clifton) or another B&B hunk. Will Steffy become obsessed with the idea of having a replacement baby? That could lead her to pull Liam closer and hope to expand their family. The sorrow of losing “Phoebe” could leave Steffy distraught and desperate.

Then again, Steffy could take her time and truly heal. Perhaps a pregnancy could come when Steffy finds new love and is truly ready. It’s also possible Steffy will be turned off the idea of adding to her brood for a while. Steffy may think it’d remind her too much of giving up “Phoebe” to Hope.

In other words, The Bold and the Beautiful will have plenty of directions they can take Steffy in. Her family’s future remains a big question mark for B&B viewers, but she’ll undoubtedly keep adoring Kelly and giving her the best life possible. That’s something that’ll really matter to Steffy.

Do you think heartbroken Steffy will hope for another baby soon? Will she focus on her career and healing for a while instead? We’ll give you updates as other B&B news comes in. Stay tuned to the CBS soap and don’t forget to check CDL often for the latest Bold and the Beautiful spoilers, updates and news.