BY Heather Hughes on July 8, 2019 | Comments: one comment
Related : Soap Opera, Spoiler, Television, The Bold and the Beautiful 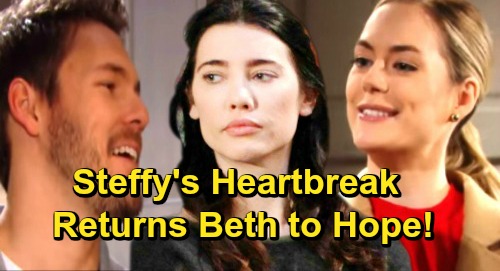 The Bold and the Beautiful (B&B) spoilers tease that Hope Logan (Annika Noelle) and Steffy Forrester’s (Jacqueline MacInnes Wood) lives will soon be changed forever. Hope had her daughter ripped away from her that night on Catalina Island, but Reese Buckingham’s (Wayne Brady) rotten scheme won’t stay under wraps forever. It won’t be long until the baby swap secret erupts into drama.

Of course, the big question on everyone’s mind is: How will the truth be exposed? The secret circle is a decent size these days, but nobody’s been willing to come clean so far. Well, poor Emma Barber (Nia Sioux) tried, but that plan didn’t exactly pan out! We need someone who can put the pieces together and will make sure Hope is reunited with her child.

Now let’s think about who might solve the puzzle and spark exposure. There’s a chance Liam Spencer (Scott Clifton) will figure it out and blow up the Beth Spencer chaos. Nevertheless, there’s someone else we have to consider. What if adoptive mom Steffy is the one to crack the case and spread the news?

Due to Jacqueline MacInnes Wood’s maternity leave, Steffy wasn’t able to be involved in a good chunk of this story. Now that Steffy’s back in action, she’s become a key player again and will be taking the lead on this next chapter. The previous one was all about Hope’s loss, but this one will be all about Steffy’s loss. Having to give up “Phoebe Forrester” (River Davidson and Madeline Valdez) will be a devastating blow.

What better way to kick off that heartbreaking outcome than to force Steffy herself to expose it? Steffy’s already wary of Thomas and will be keeping a close eye on him. It’s easy to imagine Steffy uncovering this shocker by following Thomas and overhearing. She could even get him to blurt it out in the heat of the moment.

It’d be more dramatic for Steffy to keep the secret to herself for a while and protect her family. However, The Bold and the Beautiful spoilers say both women will experience a personal victory and defeat in the aftermath. Does that mean Hope will get Beth and still lose Liam? For Steffy, it may mean she’ll lose “Phoebe” and still keep her “Steam” reunion on track.

Liam would be furious if Steffy hid the truth, so their reunion would likely crumble. That could be a hint that Steffy will do the right thing. If Steffy indeed discovers that “Phoebe” is Beth, maybe B&B will let her be the heroine of this storyline. Steffy may sacrifice her own happiness so that Hope can finally be at peace.