The Bold and the Beautiful Spoilers: Steffy Makes Move as ‘Lope’ Falls Apart – Wins Liam Back After Hope’s Douglas Blunder

BY Heather Hughes on November 5, 2019 | Comments: one comment
Related : Soap Opera, Spoiler, Television, The Bold and the Beautiful 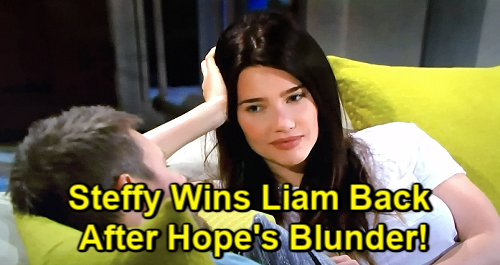 The Bold and the Beautiful (B&B) spoilers tease that Steffy Forrester (Jacqueline MacInnes Wood) could gain the upper hand in the Liam Spencer (Scott Clifton) love triangle. She’s been bonding with Liam lately while Hope Logan’s (Annika Noelle) been focused on her adoption scheme.

Hope’s priority is getting joint custody of Douglas Forrester (Henry Joseph Samiri), which could make it easier for her to gain full custody later. Of course, leaving Liam in the dark on her plans isn’t going to end well!

Steffy will invite Liam over again soon enough, which will bring another opportunity to reconnect. Their spark is already rekindling on its own, so Hope’s self-sabotage isn’t going to help.

Liam Spencer Will Get Dragged Into Hope Logan’s Custody Plot

During the week of November 11-15, Steffy will give Ridge Forrester (Thorsten Kaye) the lowdown on Brooke Forrester’s (Katherine Kelly Lang) actions. It sounds like Steffy will figure out Hope’s plot and Brooke’s knowledge of it.

The Bold and the Beautiful spoilers say Liam’s bound to get dragged into this. When you throw in the horrific nightmare that’s brewing at Forrester Creations, that can’t be good news for “Lope.”

Liam isn’t thrilled about the idea of adopting Douglas’ anyway. Once Hope pulls off her goal through a shady plan, it’ll just give him another reason to drift back toward Steffy.

Although Steffy’s now on a dating app, part of her is still longing for Liam. This is just the kind of relationship setback she needs to create an opening for herself. Steffy will have a chance to rant about Hope’s behavior and argue that Liam deserves better. She may make her move once Liam and Hope are on the verge of falling apart.

The Bold and the Beautiful spoilers say Hope will undoubtedly fight for love, but that’s a battle she seems destined to lose – at least this round of it! There are always more rounds to come when the B&B’s Steffy-Liam-Hope triangle’s involved. Still, a “Steam” reunion seems to be brewing for now.

It looks like some great drama’s about to hit, so don’t miss the shockers and shakeups ahead. We’ll give you updates as other B&B details emerge. Stay tuned to the CBS soap and don’t forget to check CDL often for the latest Bold and the Beautiful spoilers, updates and news.