The Bold and the Beautiful Spoilers: Steffy Moves Ahead With Adoption Plans – But Should She, Given Beth’s Death?

BY hellodrdavis on January 6, 2019 | Comments: 2 comments
Related : Soap Opera, Spoiler, Television, The Bold and the Beautiful 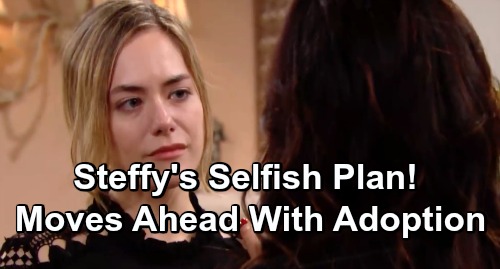 The Bold and the Beautiful spoilers tease that Steffy Forrester (Jacqueline MacInnes Wood) will be rocked by the death of Hope Spencer (Annika Noelle) and Liam Spencer’s (Scott Clifton) daughter Beth Spencer. As a new mom, Steffy’s very protective of Kelly Spencer (Zoe Pennington), and she can’t imagine what she’d do if anything happened to Kelly.

In the days to come, Steffy will offer her heartfelt condolences and support to Hope and Liam. Although they had sharp disagreements about the role of Taylor Hayes (Hunter Tylo) in their daughters’ lives, at one point they planned to raise their daughters together, as a close blended family.

At the same time that Steffy is helping Hope and Liam deal with their grief, she’ll be thinking about her own daughter and her strong desire to give Kelly a sister. Steffy wants to give Kelly the close-knit relationship she had growing up with her own sister, Phoebe Forrester (MacKenzie Mauzy).

She wants Kelly to have a best friend and confidante, and given Steffy’s relationship status right now, adoption is the only answer. But is it appropriate for Steffy to move forward with adopting a child at this time, given that Hope and Liam have just lost a baby?

On the one hand, it could be argued that going forward with the adoption during a time when Hope and Liam are grieving the loss of their own baby is insensitive. After all, Hope and Liam would be forced to watch Steffy’s family grow, while they deal with a terrible loss.

On the other hand, why should Steffy put her life and family on hold just because a tragedy occurred in Hope and Liam’s family? Besides, adoptions generally take a good deal of time to process, so if Steffy starts the process now, she’d probably expect a considerable amount of time to pass before she actually had a baby in hand, which would give Hope and Liam plenty of time to grieve.

Of course, that’s based on a typical adoption process, and signs are pointing to Steffy’s adoption process being anything but typical. It’s looking more and more like baby Beth didn’t really die, and that Dr. Reese Buckingham (Wayne Brady) plans to sell Beth to an unscrupulous baby broker… a broker who will ultimately adopt the baby to Steffy.

If that’s the case, then Steffy probably will get a baby sooner rather than later. We could be looking at a quick adoption, and this may indeed cause some emotional turmoil for Hope and Liam, as they watch Steffy’s family grow while they grieve their terrible loss.

What do you think? Should Steffy go forward with an adoption, given what Hope and Liam are going through right now? Stay tuned to the CBS soap and don’t forget to check CDL often for the latest Bold and the Beautiful spoilers, updates, and news.