The Bold and the Beautiful Spoilers: Steffy Rages as Liam Learns Flo Never Had a Baby – Rips Apart Family, Destroys Her World

BY Heather Hughes on July 22, 2019 | Comments: one comment
Related : Soap Opera, Spoiler, Television, The Bold and the Beautiful 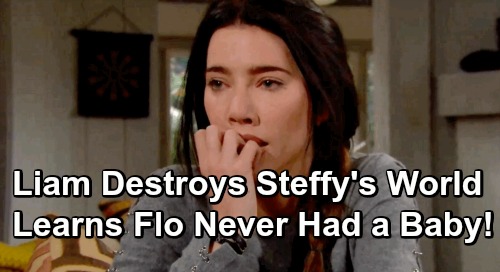 The Bold and the Beautiful (B&B) spoilers tease that the CBS soap is gearing up for some explosive drama. Liam Spencer (Scott Clifton) knows Florence “Flo” Fulton (Katrina Bowden) and Thomas Forrester (Matthew Atkinson) have a secret, so he’ll do whatever he can to figure out what it is. Wyatt Spencer (Darin Brooks) will be instrumental in helping Liam uncover the truth – or at least the first part.

B&B fans are eager to see this baby swap storyline wind down, but first thing’s first. Before Liam can find out “Phoebe Forrester” (Madeline Valdez and River Davidson) is actually Beth Spencer, he has to uncover something else Flo’s hiding: the fact that she was never pregnant at all. The Bold and the Beautiful spoilers say Liam will grow suspicious of the adoption, so he’ll be on the right track soon.

Steffy Forrester (Jacqueline MacInnes Wood) won’t see any need in stirring up trouble. She’ll tell Liam the story of how she ended up with “Phoebe,” but she won’t think Liam should dig around anymore. Steffy will feel like Liam should just leave this alone or else things may not turn out how either of them would like.

Liam may not know he’s “Phoebe’s” biological father, but he feels like her dad and intends to serve as one. Steffy, Liam, “Phoebe,” and Kelly Spencer (Zoe Pennington) have become a happy family unit, so Liam will be risking their newfound bliss. There’s a lot at stake here for the fab four.

Even so, Liam can’t rest now that he knows Thomas is involved. He’ll realize he’s heading into dangerous territory, but he’ll feel compelled to discover the real story – even if Steffy gets hurt. The Bold and the Beautiful spoilers say this could set up some serious conflict once Liam finds out the first half of this secret. After Liam learns Flo never had a baby, he may tell Steffy and insist they have to find out who the biological mother is.

Will Steffy rage at Liam for digging when she told him not to? Could Steffy beg Liam to keep quiet for the sake of their family? It’d be interesting if that was something Liam was willing to do. After all, the game changes when you’re talking about babies you’ve already bonded with and potential legal ramifications. Taylor Hayes (Hunter Tylo) and Steffy were duped, but they could still find themselves in hot water.

However, Liam knows what it’s like to lose a child. It would be awfully hard for him to just let this go under the circumstances. Flo will make an emotional confession next week, but how much will she actually confess? If Flo stops short of sharing the Beth bombshell, that could leave Liam to ponder the final puzzle piece a bit longer.

Before that final puzzle piece clicks into place, Steffy may come to resent Liam for threatening to destroy her world. Will everything change once they find out “Phoebe” is really Hope’s daughter? In time, Steffy should see that Liam was right to dig – despite the painful answers his search will bring.