The Bold and the Beautiful Spoilers: Steffy Returns with Beth Swap Discovery – Hides The Truth, Can’t Bear to Lose ‘Phoebe’

BY Kinsley Goldman on March 24, 2019 | Comments: one comment
Related : Soap Opera, Spoiler, Television, The Bold and the Beautiful 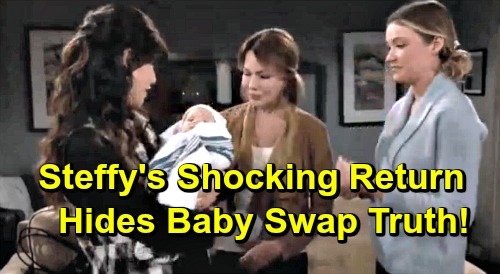 The Bold and the Beautiful (B&B) spoilers tease that Steffy Forrester (Jacqueline MacInnes Wood) will try to enjoy herself in Paris with the girls. She clearly wants to be with Liam Spencer (Scott Clifton) deep down, but she’s chosen to step aside for “Lope’s” sake. Steffy feels like Liam needs to honor his vows to Hope Spencer (Annika Noelle) and continue to support her journey to healing.

Of course, Steffy will probably do some pining while she’s gone. Her feelings for Liam won’t evaporate just because she’s out of the country. Nevertheless, Steffy will keep telling herself this is for the best. She may have no idea that Liam and Hope are facing drama back home. Now that Thomas Forrester (Matthew Atkinson) is in the picture, Hope could inch toward him as the man in her life.

Regardless, Steffy could face some drama of her own. Jacqueline MacInnes Wood’s maternity leave forced this exit, but that doesn’t mean The Bold and the Beautiful can’t put it to good use. They might as well make the most of it and later have Steffy return with a secret. Could Steffy somehow learn the truth about “Phoebe Forrester” (Isabella de Armas and Redford Prindiville) while she’s gone?

Zoe Buckingham’s (Kiara Barnes) behavior could’ve raised red flags for Steffy. If she took time to really think about Zoe’s weird outburst, Steffy would have a clue to ponder. There’s a good chance she’ll remain in touch with Dr. Taylor Hayes (Hunter Tylo) while she’s gone, too. Taylor could easily slip up and spill the news that Dr. Reese Buckingham (Wayne Brady) facilitated the adoption.

That would make Zoe’s near confession even more perplexing. It might be worth a follow-up. Steffy could summon Zoe or even Florence “Flo” Fulton (Katrina Bowden) for a grilling session. They’ve both had a hard time keeping this B&B baby swap secret, so either one of them would be tempted to crack.

Of course, Zoe wants to save Reese from prison. If she was confronted, she might push Steffy to keep her mouth shut and keep her illegally adopted daughter in the process. Steffy will bond with “Phoebe” even more while she’s gone, but she would be hesitant to keep this life-changing info from Hope.

It would certainly be a tough call, but what happens if Steffy returns home to find “Lope” is over and “Thope” is on? Would Steffy hand over Beth Spencer and risk pushing Liam back in Hope’s direction? Hope may be happy with Thomas by then, so Steffy might keep the Beth bombshell to herself and leave things alone. She loves little “Phoebe” and will want to keep her if at all possible.

Bottom line, The Bold and the Beautiful spoilers say this secret could hurl Steffy back into the action. There’s no guarantee Steffy will know the truth when she returns, but it’d be an excellent way to include Steffy again. We’ll give you updates as other B&B details emerge. Stick with the CBS soap and don’t forget to check CDL often for the latest Bold and the Beautiful spoilers, updates, and news.