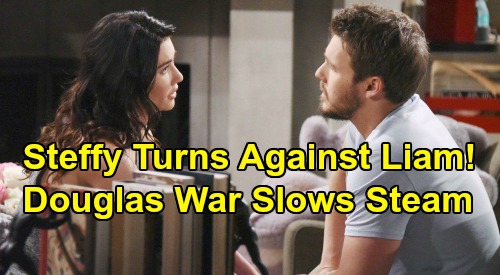 The Bold and the Beautiful (B&B) spoilers tease that Steffy Forrester (Jacqueline MacInnes Wood) will be forced to take sides. B&B fans know there have been some worries about Douglas Forrester (Henry Joseph Samiri) and the threat Thomas Forrester (Matthew Atkinson) poses. During the week of October 21-28, Ridge Forrester (Thorsten Kaye) will defend Thomas as a father. He’ll do his best to convince Steffy that Thomas has learned from his mistakes and can be trusted.

Ridge will assure Steffy that the boy will remain with his dad. He’ll try to instill confidence in Thomas’ parenting skills as part of his push for forgiveness. Steffy was hurt deeply by Thomas, so it’s been hard for her to get past his Beth Spencer (River Davidson and Madeline Valdez) deception. However, Ridge will hope Steffy can start inching in that direction. He’ll just want to mend fences for his beloved kids.

Steffy may be hesitant to truly forgive Thomas, but perhaps her anger toward Hope Logan (Annika Noelle) will take over. The Bold and the Beautiful spoilers say Hope and Steffy have a shocking showdown coming up. Things will get pretty vicious, and this will play out before Hope and Brooke Forrester (Katherine Kelly Lang) form a plot to keep Douglas from Thomas.

Of course, Liam Spencer (Scott Clifton) will become part of that plot. He’s supported the idea of keeping Thomas at a distance. Protecting Douglas has always been “Lope’s” priority, but that’ll get awfully complicated. Steffy may disapprove thanks to her confrontation with Hope and her later chat with Ridge. She may begin siding with Thomas, which could bring some serious conflict.

Steffy will inevitably lash out at Hope again, but what about Liam? He should get caught in the middle of their feud and will surely take some heat in the process. Steffy will acknowledge her brother’s transgressions, but she may think Liam and Hope are going to extremes with Brooke’s help. Their efforts to keep Thomas out of the picture may convince Steffy to turn against Liam for now.