The Bold and the Beautiful Spoilers: Steffy Unleashes Fury Over Hope’s Deception – Liam Forced to Pick a Side, Supports Steffy? 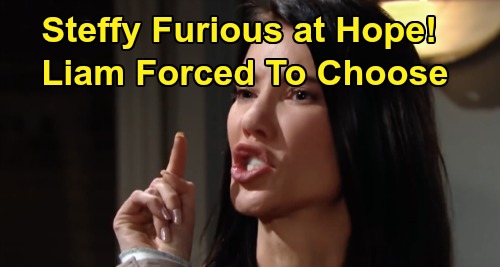 The Bold and the Beautiful (B&B) spoilers tease that Steffy Forrester (Jacqueline MacInnes Wood) and Hope Logan (Annika Noelle) may face another round of battle. B&B fans can expect Hope to make an admission to Liam Spencer (Scott Clifton) soon. She’ll come clean about her faceoff with Thomas Forrester (Matthew Atkinson) at Forrester Creations, so that’ll bring plenty of concerns and questions.

We know Brooke Forrester (Katherine Kelly Lang) will confess to Ridge Forrester (Thorsten Kaye) later this week, and Hope will want to do the same with Liam. Hope didn’t mean for Thomas to die – and thankfully, he didn’t. Thomas just showed up and embraced an emotional Hope, who was clearly relieved to see hm.

Brooke and Hope’s cover-up didn’t last long, but they still hid the truth from Thomas’ family. Of course, Hope is an adult who doesn’t have to listen to her mother’s advice. She should’ve come forward from the get-go anyway, so that could be an issue soon enough.

Fortunately, Thomas is indeed alive and well, but Brooke and Hope won’t get off scot-free. The Bold and the Beautiful spoilers say Brooke will lose Ridge over this, but what about Hope’s consequences? Liam may stand by Hope initially, but that could get tougher after Steffy flies off the handle. Once Steffy knows the entire story, she could easily track Hope down and unleash her fury.

Steffy won’t give Thomas a pass for his actions, but she probably won’t think Hope deserves one either. Liam Spencer (Scott Clifton) might find himself forced to pick a side. That could be tricky since he won’t be pleased about Thomas pushing Hope to make love. At the same time, how can Liam defend Hope’s initial silence about Thomas? It’ll be a tight spot for Liam, but he might back Steffy up since there’s been so much “Steam” bonding going on. B&B is really bringing them closer.