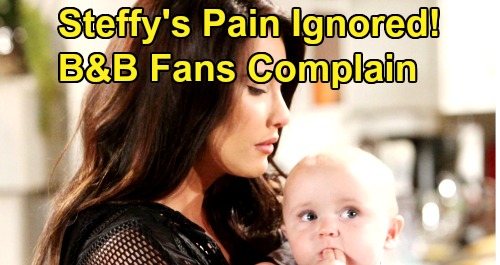 The Bold and the Beautiful (B&B) spoilers reveal that some fans are speaking out about one botched part of the baby swap storyline. Hope Forrester (Annika Noelle) certainly deserves some happy moments after months of sadness. She deserves to unleash her fury on Florence “Flo” Fulton (Katrina Bowden) as well.

However, we can’t help but wonder why Steffy Forrester’s (Jacqueline MacInnes Wood) perspective is being ignored. Steffy was naturally an emotional wreck after she learned her beloved “Phoebe Forrester” was actually Beth Spencer (River Davidson and Madeline Valdez). She was devastated as she watched Hope leave with the baby she came to love as her own.

It’s nice that we’re seeing Hope on cloud nine, but it’d be a more satisfying story if we also saw Steffy in the depths of despair. This is a daytime drama! What’s more dramatic than an excruciating loss like this? We saw Hope’s time of mourning and this is a time of mourning for Steffy, too. She’s grieving for a child that was never really hers, which has to be taking a serious toll.

B&B may show more of Steffy’s perspective later, but will it have the same impact? The time to strike is now – or even before now really. The Bold and the Beautiful viewers have missed out on crucial moments and will seemingly continue to miss them. There’ll be lots of other drama revving up, so it feels like we’re just brushing past Steffy’s pain here.

On Twitter, many B&B watchers piped up with complaints. “Based on next week’s previews, Steffy (the other victim of this baby swap) has been completely scrubbed from the story,” one fan tweeted. “We aren’t getting anything about her reactions or her dealing with the fallout.”

Another viewer said, “I’m glad Hope got Beth back but now I need to know what’s going on with Steffy.” One more fan was disappointed that “we have to use our imagination and guess what Steffy is going thru.” A baby switch story like this affects the duped adoptive mom a great deal, so let’s hope for more of Steffy’s side soon.

Do you think we should be seeing more of Steffy’s sorrow – is B&B focusing too much of the baby Beth story on Hope and not enough on Steffy? The Bold and the Beautiful spoilers say the action will heat up in the coming weeks, so stay tuned. We’ll give you updates as other B&B news comes in. Stick with the CBS soap and don’t forget to check CDL often for the latest Bold and the Beautiful spoilers, updates and news.