BY Heather Hughes on June 22, 2019 | Comments: one comment
Related : Soap Opera, Spoiler, Television, The Bold and the Beautiful 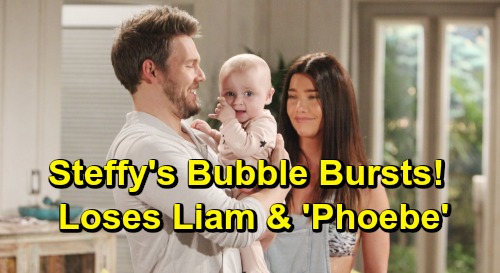 The Bold and the Beautiful (B&B) spoilers tease that Steffy Forrester (Jacqueline MacInnes Wood) will face a crushing double blow. B&B fans know Steffy is unknowingly raising Hope Logan’s (Annika Noelle) daughter. It’s not her fault that Reese Buckingham (Wayne Brady) set her up for heartbreak, but that’s exactly what he did.

Unfortunately, Steffy’s about to make matters worse for herself. She already has to be honest. Liam Spencer (Scott Clifton) has moved back in, so they’re becoming a solid family unit. The Bold and the Beautiful spoilers say Liam and Steffy’s feelings for each other will naturally grow stronger. It won’t be long until sparks are flying and they’re really feeling the heat.

During the week of July 1-5, a former couple’s flame will burn once again. That sounds like Steffy and Liam. They’re obviously headed back in a romantic direction, so this adds another complicated layer to the baby swap drama. Liam, Steffy, Kelly Spencer (Zoe Pennington and Allison Marcia Sweeney) and “Phoebe Forrester” (River Davidson and Madeline Valdez) will be one big happy fam.

Alas, that just leaves Steffy poised for more devastation. There’s a good chance Steffy will learn the truth about “Phoebe” and keep quiet, which could certainly cost her Liam. Even if Steffy does everything right, Liam still has deep feelings for Hope. Once both Hope and Liam find out “Phoebe” is actually Beth Spencer, Liam may have to explore those feelings again.

Liam’s renewed feelings for Steffy won’t go away, but he could drift toward Hope and bond with her over their daughter. Hope and Liam have set repeatedly that everything would be different if Beth were still alive. Will that turn out to be true? Will time and distance change things or will “Lope” reunite?

The Bold and the Beautiful spoilers say Liam will have a lot to sort out, so he may need to think for a while. He’s getting the chance to know and love his bio kid as “Phoebe.” That love could be even stronger once he realizes there’s a reason he feels so connected to her. Liam will want Hope to feel that connection as well. They might move back in together as Hope gets to know her beloved baby girl.

Where does that leave Steffy? Liam-less and second daughter-less – a doubly distressing blow that could send her down a dark path. The Bold and the Beautiful spoilers say some gripping drama’s ahead, so stay tuned. We’ll give you updates as other B&B news comes in. Stick with the CBS soap and don’t forget to check CDL often for the latest Bold and the Beautiful spoilers, updates and news.