BY hellodrdavis on July 28, 2019 | Comments: 2 comments
Related : Soap Opera, Spoiler, Television, The Bold and the Beautiful 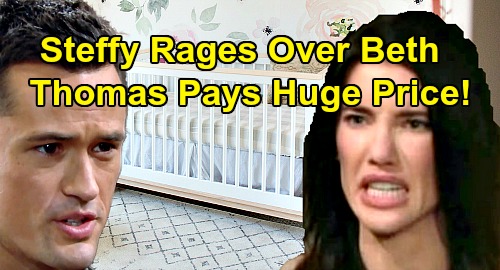 The Bold and the Beautiful spoilers tease that Steffy Forrester (Jacqueline MacInnes Wood) will be in for some serious heartbreak. She’ll soon learn that her adopted daughter Phoebe Forrester (River Davidson and Madeline Valdez) Is actually Hope Logan (Annika Noelle) and Liam Spencer’s (Scott Clifton) daughter Beth Spencer. She’ll need a lot of support to get over her grief over the unimaginable loss of her adopted daughter.

It will be an extremely difficult time for Steffy, as most people will probably be rallying around Hope, Liam, and Beth. She’ll surely get lots of comfort from Ridge Forrester (Thorsten Kaye), who will feel absolutely terrible for his daughter. And under normal circumstances, Steffy would get emotional support from her brother Thomas Forrester (Matthew Atkinson), but these are anything but normal circumstances.

Along with having to be told that Phoebe is actually Beth, Steffy will have to hear all about how Thomas has known the secret for weeks but said nothing, all because of his selfish desire to make Hope his wife. This will be a lot for Steffy to process, and at first she’ll likely be overwhelmed by the details and by her intense grief over the realization that she’s lost the little girl she considered to be her daughter.

Steffy will likely experience a range of emotions, including denial and despair over her loss. But as a little time passes, she’ll surely realize that the right thing is for Hope and Liam to reclaim their daughter in whatever way makes the most sense and doesn’t disrupt or unsettle Beth. And at that point, the realization of what was done to her, Hope, Liam, and Beth will set in.

Steffy is likely going to wind up feeling intense anger and frustration as the true nature of the conspiracy to keep Beth away from her parents becomes clear to her. She’ll certainly reel from the actions of Florence “Flo” Fulton (Katrina Bowden), Zoe Buckingham (Kiara Barnes), Shauna Fulton (Denise Richards), and Xander Avant (Adain Bradley). But she’ll probably have the most difficulty with what Thomas – her own brother – did.

As B&B viewers know, Steffy defended Thomas to Liam when Liam was suspicious about Thomas’ motives in marrying Hope. She repeatedly argued that Thomas may have had problems in the past, but that he had overcome his issues. She’s surely going to be furious with her brother for stooping to a new low in withholding the truth about Beth from Hope and everyone else and for causing her so much pain.

At some point, Thomas is going to have to face his sister over all of his actions, and that should be an explosive scene. Steffy will likely unleash her rage onto her brother – someone who was supposed to have her back, but actually intensified her pain by prolonging her bonding with Beth, which will make their ultimate separation that much harder.

It will be interesting to see what happens with Steffy and Thomas’ sibling relationship going forward. Something tells us that it’s going to be extremely difficult for Thomas to explain his actions to his sister, and for the two to get past what Thomas has done. Steffy’s rage will likely be intense, and she may end up exiling Thomas from her life. The Bold and the Beautiful spoilers say that the is no question Thomas will pay a shocking price for his crimes and deceit!

Do you think Steffy will ever be able to forgive Thomas for what he’s done? Stay tuned to the CBS soap and don’t forget to check CDL often for the latest Bold and the Beautiful spoilers, updates, and news.