BY Heather Hughes on October 16, 2019 | Comments: one comment
Related : Soap Opera, Spoiler, Television, The Bold and the Beautiful 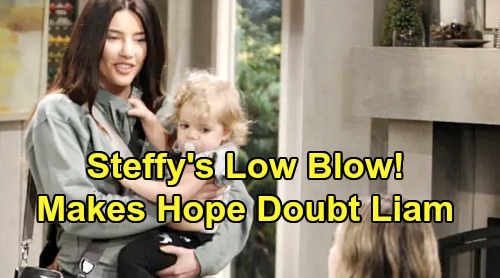 The Bold and the Beautiful (B&B) spoilers tease that Steffy Forrester (Jacqueline MacInnes Wood) and Liam Spencer’s (Scott Clifton) private conversation could lead to major worries for Hope Logan (Annika Noelle). Hope will fly off the handle over Liam’s secret trip to see Steffy with Beth Spencer (River Davidson and Madeline Valdez) in tow. She’ll pick up on hints about Steffy’s lingering feelings through a message left for Liam and decide Steffy needs to back off.

However, Steffy won’t just sit back and take Hope’s criticism. She’ll fire back with some criticism of her own. Steffy will feel like Hope just can’t stop twisting the knife. Liam is the father of Steffy’s child as well. Kelly Spencer (Zoe Pennington) is always going to keep them tied together, so Steffy may argue that she has every right to spend time with Liam.

Furthermore, Steffy may have a huge problem with Hope’s attempt to keep Beth away from her. She was nothing but good to that little girl while they were all deceived. Steffy may wonder if all that talk about keeping her in Beth’s life was just that – talk and nothing more.

Regardless, The Bold and the Beautiful spoilers say Steffy will deliver a low blow during this confrontation. It’ll be one that leaves Hope completely appalled. On October 21, Steffy will manage to rip away the upper hand. How will Steffy do that exactly? There are some interesting options to consider here.

B&B spoilers say Steffy might reveal something Liam told her in confidence. If Liam admits he struggled with doubts about returning to Hope, that might be something Steffy could throw in Hope’s face. Then again, Steffy might argue that Liam only reunited with Hope out of obligation. She could argue that Liam wanted to honor their previous commitment after they learned the truth about Beth.

Steffy could even argue that Liam will come back to her eventually. He always does! She might suggest that it’s only a matter of time until “Lope” implodes. Emotions will be running high, so Steffy will be enraged and ready to strike. She’ll just be focused on winning the argument in that moment. No matter how Steffy chooses to do that, her words should cut deep.

The Bold and the Beautiful spoilers say Steffy will get inside Hope’s head and leave her with concerns about Liam’s loyalty. It sounds like some gripping scenes are coming up, so don’t miss all the action. We’ll give you updates as other B&B news comes in. Stay tuned to the CBS soap and don’t forget to check CDL often for the latest Bold and the Beautiful spoilers, updates and news.