BY Sean O'Brien on May 18, 2019 | Comments: Leave Comments
Related : Soap Opera, Spoiler, Television, The Bold and the Beautiful 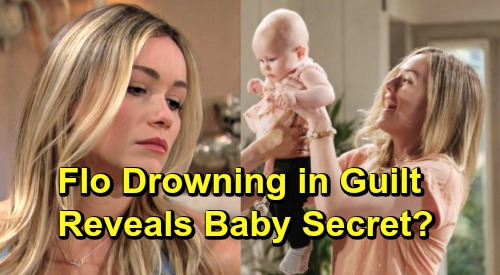 The Bold and the Beautiful spoilers tease that Steffy Forrester’s (Jacqueline MacInnes Wood) imminent return from Paris, France, will propel the Phoebe Forrester (Isabella de Armas and Rosalind Aune) drama. Now that Steffy is back in action on new B&B episodes this week, May 20-24, fans should expect the heat to be turned up on the baby swap drama and eventual reveal.

Already reeling from all that’s transpired earlier this year, Flo Fulton-Logan (Katrina Bowden) will feel as though the walls of the palace she’s living in are closing around her. The pressure of Phoebe being Beth was somewhat lessened when Steffy took her and Kelly Spencer (Zoe Pennington and Chloe Teperman) abroad awhile back. Now, a hard reality is about to set in and then grow exponentially.

Wood’s need to leave the cast earlier this year was spurned by her maternity leave. That warm-hearted, true life baby story led to a positive climax, as she and her husband, Elan Ruspoli, welcomed a baby boy, Rise Ruspoli.

As for Steffy, she has no idea that Flo falsely presented herself as the birth mother of the girl who is currently named Phoebe. That specific name, which honors Steffy’s deceased sister, Phoebe Forrester (Mackenzie Mauzy), is an emotional lightning rod in an of itself.

As for Flo, she had decided to take her mother’s (Shauna Fulton, Denise Richards) advice and move forward. Choosing to rekindle romance with Wyatt Spencer (Darin Brooks) was a major step toward a desired future. But opting to move into Eric Forrester’s (John McCook) breath-taking Beverly Hills estate pushes this developing storyline to a higher level.

Quinn Forrester (Rena Sofer) generously arranged for her friends to live with ‘Queric’, which means that Flo and Shauna will be kicked out at some point after the Beth reveal takes place. It feels likely that Wyatt will also emotionally disenfranchise himself from his reclaimed first love during that time period as well.

All of the referenced speculation, which is more like a probable accurate projection, jump starts with Steffy’s come back to Los Angeles, California. In tow will be Phoebe and her sister, Kelly.

The returned presence of Steffy’s adopted daughter will be a constant guilt provoker, most likely happening within Eric’s company, Forrester Creations, where Flo has just been hired. Phoebe will be in the fashion house’s day care with her assumed adoptive mom and assumed birth mother present. Of course Beth’s real mother, Hope Spencer (Annika Noelle), will be there as well.