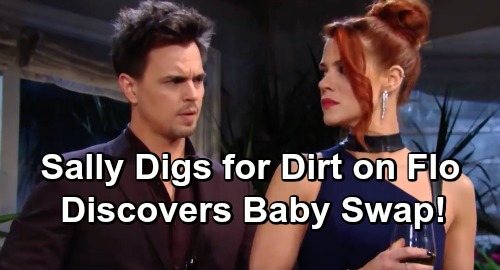 The Bold and the Beautiful (B&B) spoilers tease that Sally Spectra (Courtney Hope) will consider Hope Spencer’s (Annika Noelle) loss as well as Florence “Flo” Fulton’s (Katrina Bowden). After Flo’s strange behavior at Wyatt Spencer’s (Darin Brooks) dinner party, Sally will feel like his ex has some real issues. She’ll naturally think Flo’s struggling because she gave up her daughter for adoption.

Of course, B&B fans know “Phoebe Forrester” (Isabella de Armas and Redford Prindiville) isn’t Flo’s child. “Phoebe” isn’t even “Phoebe.” She’s actually Beth Spencer, the daughter Hope believes is dead. Nevertheless, Sally and several other crucial characters will remain in the dark for now. They’ll think Flo’s battling guilt and regrets for a different reason, so she should get some sympathy.

Sally will talk to Wyatt about Hope and Flo’s apparent connection. She’ll be able to see why they hit it off. Sally will point out that Hope spent all those months carrying Beth and preparing to love her. It was devastating when she didn’t go home with a baby. Sally will think Flo’s situation isn’t too far off. She’ll contend that Flo was pregnant at the exact same time and is now dealing with a loss, too.

The Bold and the Beautiful spoilers say this could stir up some curiosity. It may serve as a seed that’ll grow into something later. Liam Spencer (Scott Clifton) may hear Sally’s observation and wander down a dangerous path because of it. Wyatt could easily do the same. However, it might be interesting if Sally herself realized there could be more to the story here.

Sally has proven she can be a scrappy schemer when she has to be. What happens when Wyatt and Flo inevitably start to reconnect? Will Sally fight for her man? Will she try to get rid of the competition? Sally might be able to do that if she scores dirt on Flo. She could do some digging and hope she comes up with enough to turn Wyatt against his ex.

The Bold and the Beautiful spoilers say Sally could get some other stunning clues, so it’s possible she’ll find out the truth down the road. Do you think Sally will figure out “Phoebe” is Beth? Will she deliver that shocker to Hope and leave Wyatt reeling?

B&B fans won’t want to miss the hot drama ahead! We’ll give you updates as other news comes in. Stick with the CBS soap and don’t forget to check CDL often for the latest Bold and the Beautiful spoilers, updates and news.