The Bold and the Beautiful Spoilers: Thomas Arrested and Put Away After Beth Reveal – Hope Becomes Douglas’ Main Parent? 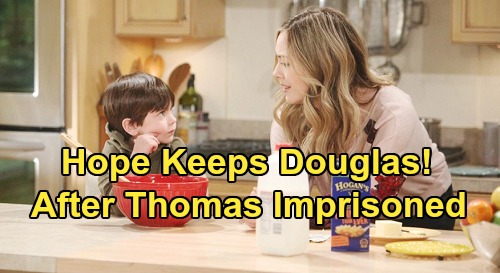 The Bold and the Beautiful spoilers tease that Hope Forrester (Annika Noelle) won’t necessarily have an easy out when her husband’s amoral and at times, illegal behavior is exposed. There are various roadblocks that already stand in her way, with more that can follow. However, this situation will at least produce a positive for the young man she’s grown to care for.

Douglas Forrester (Henry Joseph Samiri) is not a road block. He’s a kind little boy who lost his mother, hopefully through natural means and not because of anything his father may have done.

Hope’s bond with Douglas hasn’t actually been engineered by Thomas Forrester (Matthew Atkinson). While it’s true that Atkinson’s character has ensured repeated interactions between his son and Hope, those two poor souls bonded on their own.

Connection Between Hope Logan And Douglas Forrester Is Real

The connection between this woman who believes Beth Spencer (Madeline Valdez and River Davidson) was stillborn on Catalina Island and Douglas is real and lasting. Hope could surely become Douglas’ main parent when his father is almost certainly remanded to a criminal institution for an extended period of time.

Of course B&B fans know that the coming end of the baby swap storyline will also revive Hope’s connection with Beth. Phoebe Forrester’s unmasking as Hope and Liam’s daughter will make her a mother to two children.

To this point in the plot, Hope’s stages of grief have naturally created a blue state of mind. That’s a driving reason why she’s pushing hard to marry Thomas. Hope believes that becoming a mother to Douglas will fill a hole in her heart that Beth’s perceived stillbirth caused.

Hope Logan Will Be Furious About Thomas Forrester’s Dirty Deeds

The unimaginable revelation that Beth never died will be coupled, either immediately, or thereafter, by a downside reveal. Thomas’ knowledge of who Phoebe really is and his self-serving actions, when revealed, will end  all of Hope’s sympathy for him.

All of the many terrible things Thomas has done to Flo Fulton Logan (Katrina Bowden), Zoe Buckingham (Kiara Barnes), and Xander Avant (Adain Bradley), and the criminal acts he committed against Liam Spencer (Scott Clifton), Steffy Forrester (Jacqueline MacInnes Wood) and most especially, Emma Barber (Nia Sioux) must be exposed, addressed, and punished. The weight of everything must create a consequence where Thomas is put away in prison so he can pursue mental health and redemption.

Hope will be furious whenever she learns what Thomas has been doing since he returned from New York after Caroline’s death. Her protective instincts toward Douglas will also deepen while she reclaims her own child.

Do you think Hope will become Douglas’ main parent and guardian after Thomas is arrested and goes to prison. CDL is a leading source for everything linked to The Bold and the Beautiful. Check back regularly for B&B spoilers and news!