The Bold and the Beautiful Spoilers: Thomas Forced to Flee After Liam’s Beth Bomb – Horrified Hope Realizes She Married a Monster

BY Heather Hughes on August 2, 2019 | Comments: one comment
Related : Soap Opera, Spoiler, Television, The Bold and the Beautiful 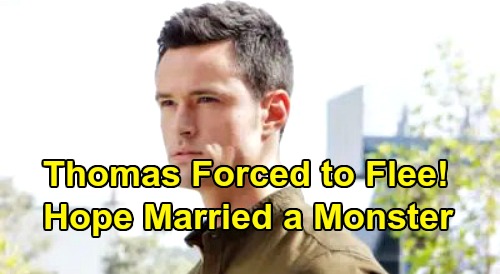 The Bold and the Beautiful (B&B) spoilers tease that Thomas Forrester (Matthew Atkinson) will try to stop Liam Spencer (Scott Clifton) from derailing his dreams. Thomas feels like he’s got everything he’s ever wanted – well, almost anyway. Hope Forrester (Annika Noelle) doesn’t love Thomas and hasn’t been interested in sex, but Thomas still feels like the pieces are coming together.

That’s why Thomas will be furious to learn Liam’s about to ruin everything. Once Thomas knows the jig is up, he’ll decide it’s time for a hail Mary. Thomas will spook Hope as he whisks her away and makes plans for their escape. It’ll be a confusing whirlwind for poor Hope!

The Bold and the Beautiful spoilers say they’ll make a stop at Forrester Creations, where Liam will catch up with them. A heated showdown will ensue, which will really get Thomas riled. He’ll try to keep Hope from hearing any Beth Spencer details, but Liam will naturally be persistent. B&B fans can expect Thomas to deliver a blow that sends Liam to the floor. That’ll give him some time to bolt with his bride.

Thomas will force Hope up to the roof with him, but she’ll undoubtedly put up a fight. She won’t understand what in the world’s going on, but Thomas may push Hope to trust him. Perhaps Thomas will have a helicopter waiting to take them as far away from Liam as possible. He certainly won’t want Hope learning the truth about her daughter – or that he knew and stayed silent!

Liam will thankfully make it back on his feet and race up after them. He’ll blurt out that Beth is alive and assure Hope that he’s confirmed it. Their precious little girl isn’t dead after all. Thomas will decide he can’t stick around and see how the rest of this plays out. He won’t be able to take Hope with him, but he’ll still feel like fleeing is his best strategy here.

Thomas will know he’ll be in deep trouble over all his threats and secret-keeping. He’ll also worry about the flood of questions he’ll face regarding Emma Barber’s (Nia Sioux) death. The Bold and the Beautiful spoilers say Thomas will try to bolt, and it looks like he may succeed. However, it won’t be long until Thomas convinces himself he still has a shot with Hope, which could bring him out of hiding later.

Thomas will prove he’s a madman with his wild actions in the coming episodes. Hope will be deeply disturbed when she realizes just how crazy her new husband is! We’ll give you updates as other B&B news emerges. Stay tuned to the CBS soap and don’t forget to check CDL often for the latest Bold and the Beautiful spoilers, updates and news.