The Bold and the Beautiful Spoilers: Thomas Goes From Dangerous to Deadly – Secret Circle Terrified

BY Kinsley Goldman on June 14, 2019 | Comments: one comment
Related : Soap Opera, Spoiler, Television, The Bold and the Beautiful 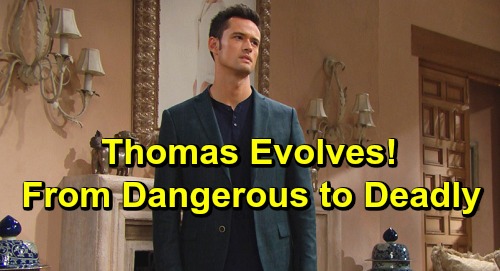 The Bold and the Beautiful (B&B) spoilers tease that we’ll soon get one step closer to that deadly fate we’ve been promised. You’ve probably heard by now that not everyone will live through the summer on the CBS soap. Someone will die soon enough, so B&B has to start working toward that through some terrible character choices.

Of course, that means Thomas will need to keep a lid on this secret, which should be tough with so many other frazzled secret-keepers. Florence “Flo” Fulton (Katrina Bowden) obviously poses a threat. It didn’t take much work for Thomas to pressure her into confessing, so he’ll know keeping Flo’s mouth shut is a serious concern.

Xander Avant Is The Wildcard

Zoe Buckingham (Kiara Barnes) doesn’t bring as much risk since her dad, Dr. Reese Buckingham (Wayne Brady), involved. Thomas can use that to keep Zoe on his side. However, Xander Avant (Adain Bradley) is the real wildcard here.

He’s already tried to confess to Hope and Liam Spencer (Scott Clifton) once; he could and most likely will try again – at least if Thomas doesn’t do something.

On Friday’s new B&B episode, June 14, Xander and the others will be shocked by Thomas’ sudden turnaround. He’ll be very much against Hope or anyone else ever learning this secret. Thomas will make it clear that anyone who dares to go against his wishes will pay the price. Perhaps one of them could pay with his or her life.

Raised Stakes Will Take A Toll

However, Flo and Zoe should end up being able to obey orders. It’s Xander who may be in real jeopardy. His own desire to do the right thing may bring his deadly downfall. Whether Thomas actually commits murder or perhaps causes an accident, all signs point to some sinister turns for his character.

The Bold and the Beautiful spoilers suggest this Beth Spencer shocker could set everything in motion. Now that Thomas knows the truth, the raised stakes could take a toll on him mentally. Thomas will have to lie to Hope and that can only make matters worse. The stress of it all could leave Thomas ready to take out anyone who stands in his way!

Next week will bring another round of Thomas’ manipulation and crazy moves. It should begin the slow march toward someone’s deadly outcome. We’ll give you updates as other B&B news comes in. Stay tuned to the CBS soap and don’t forget to check CDL often for the latest Bold and the Beautiful spoilers, updates and news.