The Bold and the Beautiful Spoilers: Thomas Learns Hope’s Plans To Retire – Schemes To Get Her Back To Forrester 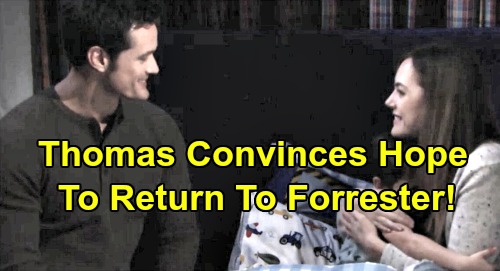 The Bold and the Beautiful (B&B) spoilers tease that Hope Logan (Annika Noelle) will soon reach a big life decision. As B&B viewers know, she’s been a long-time employee of Forrester Creations and she had a successful line – the Hope For The Future (HFTF) line at the fashion house. But lately she hasn’t really been at work much, at least that viewers have seen. Ever since she thought she lost Beth Spencer (River Davidson and Madeline Valdez), she’s been largely absent from the Forrester scene.

Well, according to B&B spoilers, Hope will soon discuss her future with Liam Spencer (Scott Clifton). It seems that Hope will be seriously contemplating a complete retirement from the fashion industry. It looks like she’ll tell Liam that she wants to devote more time to Beth. And of course, since she just became Douglas Forrester’s (Henry Joseph Samiri) full-time adoptive mother, that puts a lot more on her plate, too.

It seems that Liam will be supportive of Hope’s decision to retire and become a full-time mom to Beth and Douglas, but there will be one person who won’t be happy to hear about the development, and that’s Thomas Forrester (Matthew Atkinson). As B&B viewers know, Thomas is still under the belief that he and Hope could somehow become a couple again, and he seems determined to try to make that happen.

Thomas feels that he’s really made inroads with Hope since his big death scare. He stayed away after falling into the vat of “acid” in order to prove a point to Hope about how good people can keep bad secrets when they’re pushed by certain forces. And that seemed to get to Hope a little bit, which has encouraged Thomas. He now seems to think that if he works hard enough, there’s a chance that he, Hope, and Douglas could be a family of their own.

But Thomas will soon learn from Liam about Hope’s plan to retire from Forrester Creations, and that will get him thinking. He won’t want to lose his main access to Hope, which will be through Forrester in the years to come. But he can’t readily have contact with Hope if she retires, so it looks like Thomas will start working on a plan to get Hope to come back to Forrester and work with him on revitalizing the HFTF line.

And that might be a tough sell at first, since for Hope to agree to this would require her to spend time around Thomas, as well as to rethink her retirement plans. But it seems that Thomas will really pull out all the stops and do everything he can to get Hope to agree to reinvigorate the HFTF line. Of course, we should note that Liam is now back to work at Spencer Publications, so he wouldn’t be around Forrester to keep an eye on Hope’s interactions with Thomas – which is just the way Thomas will want it.

It even looks like Thomas will enlist Douglas to try to convince Hope to stay at Forrester and work on HFTF with Thomas. Exactly how Thomas will get Douglas involved in this remains to be seen, but it’s probably a good tactic on Thomas’ part, since Hope seems to be easily swayed by Douglas. We’ll see whether she ultimately decides to continue her work at the fashion house, but we suspect there’s a good chance that she will.

What do you think? Will Hope and Thomas end up working together on Hope For The Future? Stay tuned to B&B and don’t forget to check CDL often for the latest Bold and the Beautiful spoilers, updates, and news.