The Bold and the Beautiful Spoilers: Thomas Not Done With Hope – Returns After Escape, Liam and Beth in Danger?

BY hellodrdavis on August 5, 2019 | Comments: one comment
Related : Soap Opera, Spoiler, Television, The Bold and the Beautiful 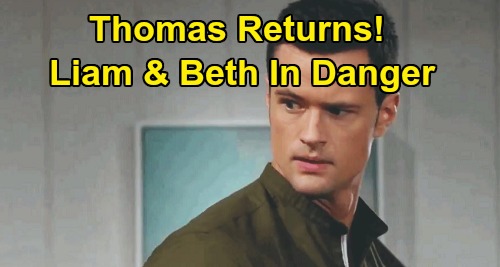 The Bold and the Beautiful spoilers tease that Thomas Forrester (Matthew Atkinson) will soon be on the run, as his world is about to spiral out of control. He’s been working very hard for months to keep Hope Forrester (Annika Noelle) in the dark about her daughter being alive. But now all of his plans for his new bride are going to go up in smoke.

As B&B viewers know, Liam Spencer (Scott Clifton) has just figured out that the baby known as “Phoebe Forrester” is actually his daughter Beth Spencer (River Davidson and Madeline Valdez). Liam also knows that Thomas has known about Beth being alive for some time, so Thomas’ big plans are about to come to an end.

In fact, everything’s about to come to a head on the roof of Forrester Creations. According to B&B spoilers, Thomas will manage to wrestle Liam away from Hope as he’s trying to explain to her that Beth’s alive and that Thomas knew it. He’ll punch and momentarily disorient Liam, then take Hope up to the roof at Forrester, where he plans to whisk her away in a helicopter.

But things aren’t going to go as Thomas planned, and he’ll flee on his own – perhaps in that helicopter – leaving Hope behind with Liam. Exactly where Thomas goes and what his next move will be remains to be seen, but a couple of things are known at this point. First off, his old pal Vinny Walker (Joe LoCicero) will be back for a few shows starting on Wednesday, August 14.

That doesn’t exactly suggest that Thomas is going to accept the situation he’s in – which is that he has absolutely no chance with Hope going forward and he’s basically alienated his entire family. Vinny is clearly trouble, and he’ll show up on canvas right around the time that B&B spoilers say that Thomas will be trying to convince himself that he can win Hope back.

Well, that’s clearly not going to happen at this point. In fact, The Bold and the Beautiful spoilers say we’ll expect to see Hope immediately file for an annulment from Thomas, if not take legal action against him. But somehow, a delusional Thomas is going to think he still has a shot at making things work with his wife. He won’t be thinking clearly, but alongside Vinny, he might cook up a new plan.

B&B buzz suggests that Hope, Liam, and/or Beth could be in danger down the road. Of course, viewers are expecting – and will get – a nice reunion period for Hope, Liam, and Beth, but that doesn’t protect them in the future. Could Thomas devise some plot to win Hope back that involves danger to Liam or Beth?

Thomas certainly could want to get rid of the competition and cook up some scheme to get rid of Liam. Or perhaps in his warped mind, he’ll think that if he abducts Beth and gets rid of her somehow, then Hope will go back to him. Of course, none of this makes real sense, but Thomas clearly isn’t in his right mind!

At any rate, we’ll have to see what Thomas cooks up. Do you think that he’ll act on his belief that he can get Hope back? Will he put people in danger again? Stay tuned to the CBS soap and don’t forget to check CDL often for the latest Bold and the Beautiful spoilers, updates, and news.