The Bold and the Beautiful Spoilers: Thomas Proposes To Hope – Boldly Whips Out Ring And Pops The Question

BY hellodrdavis on May 2, 2019 | Comments: 2 comments
Related : Soap Opera, Spoiler, Television, The Bold and the Beautiful 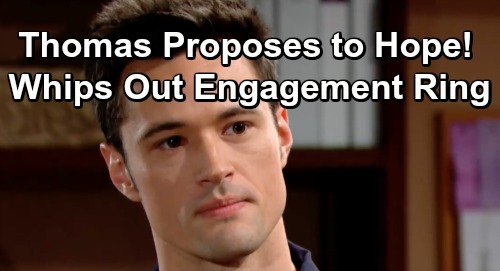 The Bold and the Beautiful spoilers tease that Hope Spencer (Annika Noelle) will be in for a real shock. She’s been spending a lot of time with Thomas Forrester (Matthew Atkinson) lately, namely because Thomas made sure that Hope sent Liam Spencer (Scott Clifton) away to Paris. Thomas played on Hope’s guilty feelings about keeping Liam away from his daughter Kelly Spencer (Chloe Teperman and Zoe Pennington) and now he’s got Hope’s attention all to himself.

Since Liam’s been gone, Thomas has managed to get to work on Hope For The Future, scoring a lot of face time with Hope at work. He was even here for her after the power outage at Forrester Creations, when Hope flashed back to that terrible night on Catalina Island when she lost Beth Spencer.

Thomas has even got Hope confiding in him about her feelings toward Florence “Flo” Fulton (Katrina Bowden) and Phoebe Forrester (Isabella de Armas and Rosalind Aune). He seems to have Hope right where he wants her, and in the coming days he’ll start using Douglas Forrester (Henry Joseph Samiri) again to tug at Hope’s heartstrings.

Of course, the end goal here for Thomas is for Hope to leave Liam for him and become a full-time mother figure for Douglas. And now that Liam will be coming home soon, it will be time for Thomas to ramp up his plan and really make his move on Hope.

According to B&B spoilers, Thomas has got a big surprise in store for Hope – one that will stun her and rock her to her core. A shirtless Thomas – probably fresh from the pool – will encounter Hope in Ridge Forrester (Thorsten Kaye) and Brooke Forrester’s (Katherine Kelly Lang) main house and decide that it’s time for the two of them to talk.

Thomas will start in with a big spiel, and he’ll talk about his and Hope’s past together. He’ll remark that they fell for each other once, and that they can do it again. The Bold and the Beautiful spoilers say that Hope will stand there stunned, in total disbelief of what she’s hearing.

But Thomas will persist, and he’ll proceed to plant a big kiss on Hope! Hope will push back, completely horrified by the scene. She just won’t have thought of Thomas in that way, and besides, she’s a married woman.

But Thomas won’t stop there. According to B&B spoilers, Thomas will lay it on thick, and he’ll tell Hope an almost certainly false story about how Caroline Spencer (Linsey Godfrey) wanted Hope to take care of Douglas if anything ever happened to her.

Finally, as Hope remains in total disbelief of what she’s hearing, Thomas will whip out an engagement ring and propose to a married Hope! Of course, this will take a lot of nerve, but this is Thomas we’re talking about, after all! He’s been completely brazen about going after Hope, and he apparently decided that it’s now or never, and it was time to make his big move.

It will be interesting to see how Hope reacts to the big proposal. Knowing Hope, she’ll probably kindly let him know that she’s not interested, but given her level of shock and horror over being proposed to as a married woman, she might just let Thomas have it!

How do you think that Hope will respond to Thomas’ big proposal? Stay tuned to the CBS soap and don’t forget to check CDL often for the latest Bold and the Beautiful spoilers, updates, and news.