The Bold and the Beautiful Spoilers: Thomas Returns to Dark Side, Can’t Be Trusted – Protective Ridge in for Rude Awakening 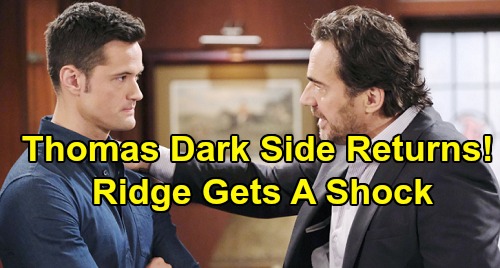 The Bold and the Beautiful (B&B) spoilers reveal that Thomas Forrester (Matthew Atkinson) could be pushed to his breaking point again. B&B fans know Thomas has softened a bit lately. He got awfully wicked there for a while, but the show’s toned it down. However, that may be in preparation for Thomas’ next round of terror. They may be building him back up for another fall.

Let’s look at what Head Writer and Executive Producer Bradley Bell said about Thomas. In a recent issue of Soap Opera Digest, Bell offered a preview of what’s ahead and raised questions about Thomas’ mental state. There’ll be major concerns about Thomas flying off the handle again and turning even darker than before.

Bell teased, “This is going to be a great, all-inclusive chapter regarding, ‘Is he still a threat? Is he stable or unstable? Can we ever trust Thomas again? What do we do with Douglas? How do we protect him?’” Those are all interesting points to consider and will be explored through the storyline this fall.

Fierce Battle Is Brewing  – Thomas Forrester Is Put To The Test

The fact that Bell didn’t go with a brain tumor defense or some other way to whitewash Thomas’ actions is telling. He seemingly wanted to leave that dark door open. B&B viewers expected redemption and that’s certainly still a possibility. Of course, there’s also the possibility that they’re simply extending the story and plan to show Thomas’ true colors once again.

The Bold and the Beautiful spoilers say a fierce battle is brewing, so the show will soon put Thomas to the test. Ridge Forrester (Thorsten Kaye) will take care of Thomas’ legal issues before they become a real problem. Nevertheless, Liam Spencer (Scott Clifton) and Hope Logan (Annika Noelle) just won’t think Thomas is a loving, capable parent anymore.

Brooke Forrester (Katherine Kelly Lang) won’t think so either. She’ll agree with Hope and Liam on this, which will bring more conflict with Ridge. Since Ridge has been so passionate in his defense of Thomas, perhaps B&B is setting him up for a fall as well. He may eventually see that he was wrong to dance around Thomas’ guilt and try to get his son out of trouble.

Thomas Forrester Loses It When Custody Of Douglas Questioned

If more danger erupts, Ridge may blame himself when it all spirals out of control. Will Thomas end up in prison after all? Is a deadly fate in Thomas’ future instead?

The Bold and the Beautiful spoilers say Thomas will become enraged as Liam, Hope and Brooke put up a fight for Douglas. We all know Thomas loses it in angry mode!

Whatever the case, all the signs are pointing to more Thomas drama and the outcome could be devastating. We’ll give you updates as other B&B news comes in. Stay tuned to the CBS soap and don’t forget to check CDL often for the latest Bold and the Beautiful spoilers, updates and news.