BY hellodrdavis on April 10, 2019 | Comments: 2 comments
Related : Soap Opera, Spoiler, Television, The Bold and the Beautiful 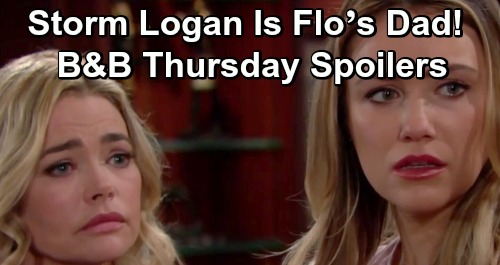 The Bold and the Beautiful spoilers for Thursday, April 11, tease that Wyatt Spencer (Darin Brooks), Shauna Fulton (Denise Richards), and Quinn Forrester (Rena Sofer) are in for a big shock. Bill Spencer (Don Diamont) has just taken a look at the DNA match results that Wyatt pulled up on his computer, and he’s absolutely stunned. Florence “Flo” Fulton (Katrina Bowden) will be a match for someone they know…but it won’t be Bill.

Rather, CDL’s B&B spoilers say that the DNA match will be between Flo and Storm Logan (William deVry), who happens to be in the DNA database. Viewers will remember that Storm is the older brother of Donna Logan (Jennifer Gareis), Brooke Forrester (Katherine Kelly Lang) and Katie Logan (Heather Tom). He passed away back in 2008 after shooting himself so that Katie, who was then in need of a heart transplant, could have his heart.

Bill will be stunned to see Storm’s name and picture pop up on the computer, and he’ll fill in Wyatt, Shauna, and Quinn about the revelation. Of course, this means that Flo is a Logan, and that she’s Hope Spencer’s (Annika Noelle) cousin and the niece of Donna, Brooke, and Katie.

The Bold and the Beautiful spoilers say that Flo won’t immediately find out about this big news, since she’ll still be involved in an intense conversation with Hope at Forrester Creations. Hope has been trying to persuade Flo that the two of them should team up and become friends, given that they are both mothers without their children. And Hope has opened up to Flo about her feelings of emptiness and grief.

On Thursday’s B&B episode, Flo will start to feel increasingly guilty about all of the pain that Hope’s in. Flo knows that she could immediately put a stop to Hope’s anguish if she just told her the truth about what she and Reese Buckingham (Wayne Brady) did. Flo knows that Phoebe Forrester (Isabella de Armas and Redford Prindiville) is actually Hope’s daughter Beth Spencer, and a part of her is dying to tell Hope the truth.

According to B&B spoilers, Flo will decide that it’s time that Hope knows the truth about her baby, so she’ll buck up and prepare to spill the whole story. But Hope will interrupt Flo and prevent her from telling the unbelievable tale.

Plus, it looks like there will be another interruption, as Wyatt will want to get to Flo and tell her the news about the DNA match and Storm being her father. B&B spoilers say that this news will rock the Spencers, Logans, and Forresters, so the information is going to get around quickly.