BY hellodrdavis on April 17, 2019 | Comments: one comment
Related : Soap Opera, Spoiler, Television, The Bold and the Beautiful 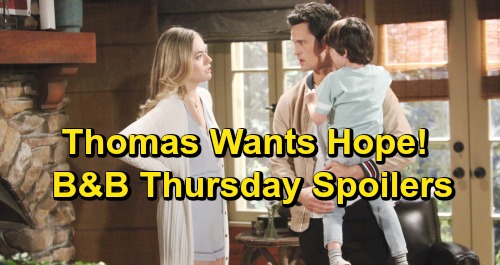 The Bold and the Beautiful spoilers for Thursday, April 18, tease that Ridge Forrester (Thorsten Kaye) will have something new to worry about. He finally got Brooke Forrester (Katherine Kelly Lang) calmed down about Taylor Hayes’ (Hunter Tylo) theory regarding Thomas Forrester (Matthew Atkinson) and Hope Spencer (Annika Noelle).

Before Taylor left for Paris, she expressed interest in getting Hope and Thomas together as a couple, in order to break up “Steam’s” marriage and free up Liam Spencer (Scott Clifton) for Steffy Forrester (Jacqueline MacInnes Wood).

The whole situation led Ridge to have a conversation with Thomas, during which he cautioned Thomas about developing feelings for Hope. At the time, Thomas seemed offended that his dad would even suggest that he might go there, but since then Thomas and Douglas Forrester (Henry Joseph Samiri) have spent quite a bit of time with Hope.

On Thursday’s episode of B&B, Ridge and Thomas will have another discussion about Hope, during which Thomas will share something that will alarm Ridge. It looks like Thomas may admit that he’s developing certain feelings for Hope. It will likely be in the context of appreciating what Hope is doing for Douglas in the wake of Caroline Spencer’s (Linsey Godfrey) death, as opposed to professing full-fledged feelings for Hope.

Nevertheless, Ridge won’t like what he hears. Of course, all of this is happening outside of Taylor’s awareness, since she’s in Paris with Steffy and the girls. But soon Taylor will be home, and Ridge likely knows that she’ll pick up on Thomas’ deep connection to Hope and try to use it to her (and Steffy’s) advantage.

Next, on the new episode of B&B on Thursday, April 18, Liam will reflect on his relationship with Hope. He was thrilled to see Hope smiling and laughing after finding out that Florence “Flo” Fulton (Katrina Bowden) was her cousin. It gave Liam hope that he and Hope will be able to move on after their daughter’s death.

According to B&B spoilers, Liam will plan a romantic evening for himself and Hope, thinking that they can spend some quality time together and recapture the romantic spark in their relationship. They haven’t made love since before their daughter’s death, and they desperately need to reconnect as a couple.

So, Liam will make plans to woo Hope and have an intimate evening with her. He’ll truly believe that the love that he and Hope share can overcome what they’ve both been through. But we’ll see whether Hope’s ready for what Liam’s planning just yet.