BY Heather Hughes on April 18, 2019 | Comments: one comment
Related : Soap Opera, Spoiler, Television, The Bold and the Beautiful 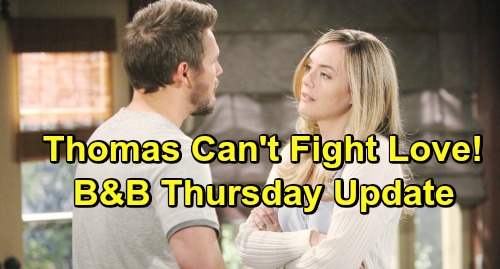 The Bold and the Beautiful (B&B) spoilers for Thursday, April 18, tease that Ridge Forrester (Thorsten Kaye) will sense big trouble. Like most B&B characters, Thomas Forrester (Matthew Atkinson) has a fickle heart. At one point, he was convinced Caroline Spencer (Linsey Godfrey) was the only woman for him. Next, Sally Spectra (Courtney Hope) came along and won him over.

Bill Spencer (Don Diamont) derailed things a bit by encouraging Caroline to fake a deadly illness, so Thomas reunited with Caroline…then dumped her for Sally…then reunited with Caroline again. Alas, it didn’t work out and now Caroline has passed on anyway. That leaves Thomas’ heart open to love once more. Naturally, Hope Spencer (Annika Noelle) is the one Thomas is hoping to lock in a future with.

In fact, Thomas will make a rather bizarre admission to Ridge soon. He’ll claim he never truly got over Hope. Wait…what? B&B fans know Hope and Thomas had a little dalliance, but it was nothing much and it seems like forever ago. What about all that Caroline and Sally bouncing? Apparently, they couldn’t compete with some great “Thope” love story that Thomas has suddenly invented.

The Bold and the Beautiful spoilers say Ridge will be concerned by Thomas’ confession. He’ll remind his son that Hope’s married to Liam Spencer (Scott Clifton), but Thomas won’t be deterred. Hope’s been connecting with Douglas Forrester (Henry Joseph Samiri) lately, so Thomas is envisioning a family unit. He’ll start plotting ways to spend more time with Hope and draw her even closer.

Meanwhile, Liam will have a similar goal. He’ll rev up the romance and attempt to strengthen the deep bond he once shared with Hope. It hasn’t gone away completely, but it’s not as strong as it could be. The Bold and the Beautiful spoilers say Liam will do everything in his power to save his marriage, so Hope will try to meet him halfway.

Over with Shauna Fulton (Denise Richards), she’ll push Florence “Flo” Fulton (Katrina Bowden) to hold off on coming clean. Shauna agrees Flo can’t live with a secret this huge, but she’ll want to talk to Quinn Forrester (Rena Sofer) before Flo blows everything up. When Shauna starts dropping hints, Quinn will insist the past is in the past. She won’t think Flo or Shauna should get hung up on old mistakes.

That’ll convince Shauna to shift their strategy. She’ll return to Flo and contend that the Logans can never know about the baby swap. The Bold and the Beautiful spoilers say Flo will once again decide to keep quiet, so the truth about “Phoebe Forrester” (Isabella de Armas and Redford Prindiville) isn’t coming out anytime soon.

It sounds like some exciting scenes are on the way. We’ll give you updates as other B&B news emerges. Stay tuned to the CBS soap and don’t forget to check CDL often for the latest Bold and the Beautiful spoilers, updates and news.