BY hellodrdavis on July 31, 2019 | Comments: one comment
Related : Soap Opera, Spoiler, Television, The Bold and the Beautiful 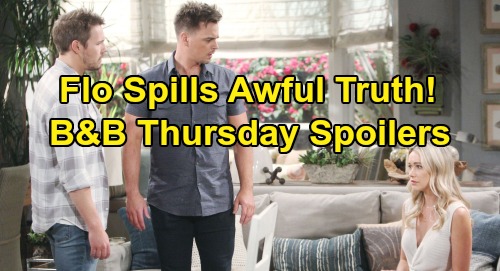 The Bold and the Beautiful spoilers for Thursday, August 1, tease that Liam Spencer (Scott Clifton) will remain stunned and quite emotional over his realization that Phoebe Forrester (River Davidson and Madeline Valdez) is actually his daughter Beth Spencer. As B&B viewers know, he’s just put the pieces of the puzzle together and finally realizes that something unimaginable happened on Catalina Island, when he and Hope Forrester (Annika Noelle) were led to believe that Beth had died.

Of course, part of that realization came from Douglas Forrester (Henry Joseph Samiri), and part came from the hospital where Florence “Flo” Fulton (Katrina Bowden) allegedly gave birth. Liam discovered that Flo did not give birth there, and how he’s going to want some answers from her. He’ll head over to Wyatt Spencer’s (Darin Brooks) place to find Flo and confront her about her lies.

Well, according to The Bold and the Beautiful spoilers, Liam is going to encounter Flo right as she’s about to voluntarily confess everything to Wyatt. As viewers know, Flo has finally resolved herself to tell Wyatt everything, in the hopes that he will support her and help her tell Hope and Liam the truth. But according to B&B spoilers, before she can get to her big confession, Liam will burst in, understandably upset over what he’s recently learned, and he’ll confront a stunned Flo and demand answers about Phoebe/Beth.

Meanwhile, on the new episode of B&B on Thursday, August 1, Thomas Forrester (Matthew Atkinson) will meet again with his friend Vincent Walker (Joe LoCicero). Viewers will remember that this is the same friend who sold Thomas the drugs that he used to dose Liam at the beach party not too long ago. According to B&B spoilers, Vincent will give Thomas something for Hope – a “wedding gift” that Vincent knows Thomas will enjoy.

Chances are, the gift will be more drugs that Thomas will intend to use on Hope to make her more susceptible to his romantic advances. Hope’s really been struggling with the prospect of sleeping with Thomas, and she’s been trying to get Liam and Beth off of her mind, but it just isn’t working.

Of course, Thomas has just ordered room service, complete with champagne, so it seems that he may well try to drug Hope with Vincent’s “gift.” Of course, if that happens, then Hope could end up sleeping with Thomas. Ongoing B&B spoilers are silent on whether we’ll see Thomas end up manipulating Hope into making love, so viewers will have to stay tuned to see what happens there.

It sounds like a lot of drama is heating up for Thursday’s episode, so stay tuned! We’ll give you updates as news comes in. Stick with the CBS soap and don’t forget to check CDL often for the latest Bold and the Beautiful spoilers, updates, and news.