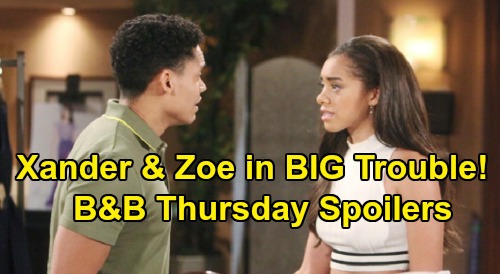 The Bold and the Beautiful spoilers for Thursday, August 15, tease that Hope Logan (Annika Noelle) and Liam Spencer (Scott Clifton) will get more visitors wanting to greet the newest member of the family, Beth Spencer (River Davidson and Madeline Valdez). The Logan sisters and Eric Forrester (John McCook) have already officially met Beth and welcomed her to the family, but now it will be time for the Spencer side of the family to be represented.

On Thursday’s episode, Bill Spencer (Don Diamont) will visit with Hope, Liam, and Beth, and the result will be some truly heartwarming scenes. Of course, it wasn’t that long ago that Bill and Liam were completely estranged, so for them to come together now for such a happy event and on good terms will be healing for everyone, for more than one reason.

OF course, Bill will probably want some answers about how this whole nightmare could have even happened. Family is more important to Bill now than ever, so Bill will want all the details so he can get to the bottom of who caused his son, Hope, and Steffy so much pain and heartbreak. Ongoing B&B spoilers say that Bill will eventually decide to make all the wrongdoers pay dearly for what they did.

Meanwhile, on the new episode of B&B on Thursday, August 15, Xander Avant (Adain Bradley) will be back in Los Angeles. He’ll appear back on the B&B scene, perhaps to support his ex, Zoe Buckingham (Kiara Barnes), as she faces some of the worst times in her life. As B&B viewers know, she’s basically waiting on the bomb to drop about what kind of consequences she’ll be facing, now that the truth is out about the secret she kept.

Well, on Thursday’s episode, both Zoe and Xander will be confronted by Brooke Forrester (Katherine Kelly Lang) and Ridge Forrester (Thorsten Kaye). It looks like they’ll have decided on some consequences for Zoe and Xander. Exactly what “Bridge” decides to do remains to be seen, but it’s likely that Zoe and Xander’s careers at Forrester Creations will be over for good.

But will Bridge decide to turn Xander and Zoe in to the police? It seems that Xander and Zoe’s decision to keep quiet about Reese Buckingham’s (Wayne Brady) and Florence “Flo” Fulton’s (Katrina Bowden) very serious crimes will inevitably come out once the police start investigating the matter. Bridge will likely have to just leave it up to the police to determine whether Xander and Zoe should be charged with obstruction.

There is, however, one thing that might come out of Bridge’s confrontation with Xander, and that’s the extent of Thomas Forrester’s (Matthew Atkinson) crimes. Xander can certainly fill them in on how he investigated Thomas’ GPS after Emma Barber’s (Nia Sioux) accident and realized that Thomas was on the scene and did nothing to try to help Emma. That should certainly rattle Ridge!

At any rate, expect to see a big confrontation, as Xander and Zoe learn how the Forresters are going to retaliate against them for their failure to speak up about Beth.