The Bold and the Beautiful Spoilers: Thursday, August 22 – Thomas Berates Douglas For Beth Secret – Ridge Takes The Blame For Son

BY hellodrdavis on August 21, 2019 | Comments: one comment
Related : Soap Opera, Spoiler, Television, The Bold and the Beautiful 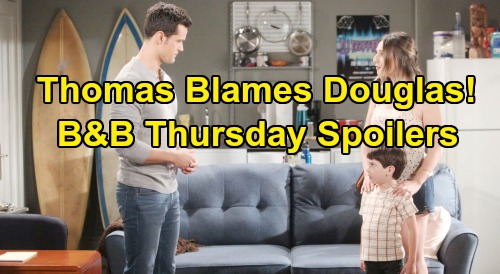 The Bold and the Beautiful spoilers for Thursday, August 22, tease that Thomas Forrester (Matthew Atkinson) will be livid after his discussion with Hope Logan (Annika Noelle). As B&B viewers know, Hope just called Thomas to tell him that she is annulling their marriage and that she never wants to see him again. Suffice it to say that Thomas didn’t take the news well, and he seems to be suffering a major psychological breakdown.

Thomas will continue to reel from Hope’s news, and it looks like he’s going to take out his anger on the one person whom he feels is responsible for doing him in…his son Douglas Forrester (Henry Joseph Samiri). Thomas simply won’t accept responsibility for his own actions, and as he psychologically devolves, he’s actually blaming a 5-year-old for all of his problems.

Of course, B&B viewers know that Thomas is acting irrationally at this point. He’s completely lost it, and according to B&B spoilers, he’s going to want some alone time with Douglas so he can confront him for his betrayal. This is simply ridiculous, since Douglas is a little kid and was just doing what was right, but in Thomas’ warped mind, this will make sense.

So, Thomas will get in touch with Steffy Forrester’s (Jacqueline MacInnes Wood) nanny Amelia (Nicola Posener). It looks like Amelia will be watching Douglas, and Thomas will lay on the charm and get Amelia to take Douglas to where Thomas is hiding out – at Vincent Walker’s (Joe LoCicero) apartment. There, an upsetting scene will unfold.

As B&B viewers know, Thomas has been harsh with Douglas in the past. He physically grabbed Douglas’ arm at one point and threatened him not to tell the secret about Beth Spencer (River Davidson and Madeline Valdez). To his credit, Douglas told his father that he was mean and fought back a bit. But this time, it looks like Thomas will really scare Douglas.

According to B&B spoilers, after Amelia brings Douglas to the apartment, Thomas will spend some time alone with Douglas and berate him for telling the Beth secret and “ruining” things for him. Douglas will be afraid of his father, as things escalate, and Thomas lashes out and shouts at him for telling about Beth.

This is a terrible development, and really shows how far gone Thomas is at this point.  Hopefully, someone – perhaps Vincent or Amelia – will step in and stand up to Thomas over this disturbing behavior.

Meanwhile, on the new episode of B&B on Thursday, August 22, Ridge Forrester (Thorsten Kaye) will need some support. As B&B viewers know, he was seriously rattled by Detective Alex Sanchez’s (Jeremy Ray Valdez) visit. It’s tough on Ridge knowing that Thomas is under investigation for Emma Barber’s (Nia Sioux) death, in addition to what he has done to Hope, Liam Spencer (Scott Clifton), and Steffy.

Ridge has consistently defended Thomas against the accusations against him, but it seems that Ridge is starting to see just how troubled his son really is. On Thursday’s episode, Ridge will get support from Brooke Forrester (Katherine Kelly Lang) as he tries to come to grips with what’s going on with Thomas.

It seems that Ridge will start to shoulder some of the blame for what’s going on with Thomas. According to B&B spoilers, Ridge will open up to Brooke about what he believes is his greatest failure in life, and it looks like it will have to do with his failure as a father. Of course, Ridge isn’t responsible for Thomas’ actions with respect to Beth, Hope, or Emma, but as a father he may feel responsible for not guiding Thomas in the right direction.

It’s probably natural for a father to have these kinds of feelings, but Brooke will probably point out that Thomas is a grown man who has made his own decisions, despite Ridge’s good guidance along the way. Hopefully, she’ll be able to reassure Ridge about his fears as a parent and remind him that he’s been a good dad who has made good parenting decisions throughout the years.