BY Heather Hughes on August 29, 2019 | Comments: one comment
Related : Soap Opera, Spoiler, Television, The Bold and the Beautiful 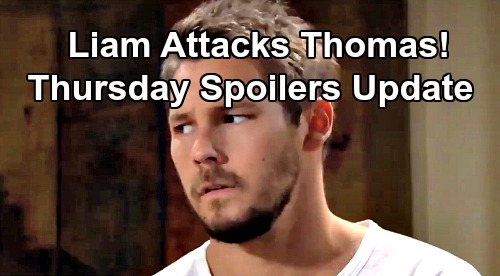 The Bold and the Beautiful (B&B) spoilers update for Thursday, August 29, tease that Liam Spencer (Scott Clifton) will remain furious with Thomas Forrester (Matthew Atkinson) over all the pain he caused. Thomas is still unconscious, but Liam won’t let that stop him from unleashing his wrath. He’ll head into Thomas’ room for a fierce outburst, which Ridge Forrester (Thorsten Kaye) will end up witnessing.

Naturally, Ridge will hit the roof over Liam’s decision to blast someone in a hospital bed. He’ll think Liam’s behavior is totally uncalled for. Ridge won’t care how angry Liam is or how much sorrow he’s endured. He’ll only be focused on Thomas’ recovery, so he obviously won’t view all this stressful criticism as helpful.

Ridge will insist Liam needs to back off and head for the exit if he can’t settle down. He’ll refuse to let Liam rant over Thomas’ body and hinder his healing. The Bold and the Beautiful spoilers say Liam won’t be sorry for giving Thomas what he deserves. He’ll think Thomas needs a punishment far worse than yelling, but Ridge will feel like his son’s going through enough right now.

Part of Liam should understand that this is tough for Ridge as a dad, but he’ll still be livid over Thomas’ role in the baby swap nightmare. Speaking of that baby swap, Shauna Fulton (Denise Richards) will have some details to spill. She just showed up to make a desperate plea to Quinn Forrester (Rena Sofer), so she’ll have to lay all her cards on the table. Shauna will make some big confessions and express deep remorse.

B&B fans know Shauna learned the truth from Flo and kept quiet, so she’ll own her share of guilt. She’ll let Quinn know she regrets everything and so does Flo, but they could really use Quinn’s help. Flo needs bail money as well as the funds for a high-powered attorney.

The Bold and the Beautiful spoilers suggest Quinn may be on Shauna’s side by the end of this pitch. However, coming to Flo’s aid won’t be easy. Eric Forrester (John McCook) and the rest of the fam are adamant that Flo should pay, so Quinn will be in a tight spot!

It sounds like some great scenes are on the way. We’ll give you updates as other B&B news comes in. Stay tuned to the CBS soap and don’t forget to check CDL often for the latest Bold and the Beautiful spoilers, updates and news.