The Bold and the Beautiful Spoilers: Thursday, December 5 – Thomas Ups His Game Against Liam – Steffy Confronts Hope About Thomas’ “Death” 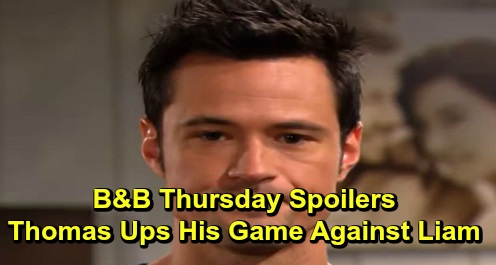 The Bold and the Beautiful spoilers for Thursday, December 5, tease that Thomas Forrester (Matthew Atkinson) will find himself having words with Liam Spencer (Scott Clifton). As B&B viewers know, Liam wasn’t at all enthused with the idea of spending time in the same airspace as Thomas on Thanksgiving, but it seems that the two men will find themselves together. Of course, Thomas probably won’t be thrilled to see Liam either, and the two men will engage in a verbal spar.

Whether this all means that Hope Logan (Annika Noelle) and Liam will find themselves at the Forrester Thanksgiving celebration remains to be seen. Liam and Hope seemed to disagree about what their plans would entail on Thanksgiving, but it did seem that Douglas Forrester (Henry Joseph Samiri) is due to attend the celebration at the Forrester mansion along with Thomas. Perhaps Thomas will encounter Liam when he comes to pick Douglas up at the cabin, but at any rate, the two will clash.

And according to B&B spoilers, after their back-and-forth, Thomas will decide to up his game against Liam. Of course, as B&B viewers know, Thomas wants nothing more than to slowly infiltrate Hope’s life and become closer to her. His end game is to ultimately be in a relationship with Hope, which seems like a long shot, but he’s determined to make it work somehow. It looks like he’ll realize that the way to get to Hope is through her work at Forrester Creations.

Ongoing B&B spoilers say that Thomas will try to woo Hope back to work on the Hope For The Future line at Forrester. It looks like he’ll get the idea to do that after his little talk with Liam, perhaps after Liam indicates that Hope will be stepping away from Forrester to spend more time with Beth Spencer (River Davidson and Madeline Valdez). Thomas won’t want that to happen, since he would rarely see Hope under those conditions, so he’ll soon plot to get Hope to work with him on Hope For The Future.

Meanwhile, on the new episode of B&B on Thursday, December 5, Steffy Forrester (Jacqueline MacInnes Wood) will engage in a confrontation of her own. She’ll drop by the cabin, perhaps to see Beth, and while she’s there she won’t be able to help herself from mentioning Hope’s actions with regard to Thomas. Steffy won’t be happy with Hope about her actions when she thought she had killed Thomas by pushing him into a vat of acid.

As B&B viewers will remember, Hope waited a full 24 hours before deciding to come clean about the incident, and she never did come forward with the truth. Rather, Thomas made himself known to her before she could reveal what she believed she had done. It looks like Steffy will call Hope out on her behavior and wonder how she could have kept Thomas’ “death” to herself. Of course, Hope will probably convey her apologies and point out that she was scared to come forward – something that Steffy will probably see as just an excuse.

At any rate, it looks like B&B viewers can expect to see some sparks fly on Thursday’s episode, both between Liam and Thomas, and between Steffy and Hope. It’s doubtful that much will get resolved between either pair, but at least Thomas will come away emblazoned and with a plan to break up Hope and Liam, so that he can eventually have Hope and Steffy can have Liam…or at least that will be his Thanksgiving wish.