The Bold and the Beautiful Spoilers: Thursday, December 5 Update – Liam Rants to Steffy About Delusional Brother – Thomas’ Pitch to Hope 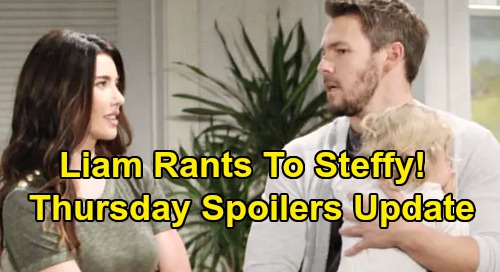 The Bold and the Beautiful (B&B) spoilers update for Thursday, December 5, teases that we’ll see some post-Thanksgiving conflict. B&B probably knew some preemptions would throw things off this year and planned ahead a bit. Regardless, the show will skip the usual fluff at the table and focus on moving the storylines along.

Douglas Forrester (Henry Joseph Samiri) will mention getting stuffed and talk about how much he hates cranberries. He’ll be glad he got to spend some of his Thanksgiving with his new official mommy, Hope Logan (Annika Noelle). There’ll also be talk about Beth Spencer (River Davidson and Madeline Valdez) spending part of the holiday together, so it’s good that they squeezed in some sister bonding time.

At Forrester Creations, Thomas Forrester (Matthew Atkinson) will encourage Douglas to work on an art project for Hope – one that’ll be important later. In the meantime, Liam Spencer (Scott Clifton) will waltz in and let Thomas know he’s onto him. Liam won’t think Thomas’ fake death scheme was about showing Hope that good people can keep secrets. He’ll think it was a manipulative move designed to teach Hope a lesson.

Liam will insist Hope’s never going to forgive Thomas for deceiving her about Beth. Thomas was willing to keep Hope’s daughter from her, so Liam will feel confident it’ll always be a major strike against him. The Bold and the Beautiful spoilers say Liam will warn Thomas to back off. He won’t want Thomas to mess with his family, but Thomas will suggest he now has a family of his own with Hope and Douglas.

Meanwhile, Steffy Forrester (Jacqueline MacInnes Wood) will stop by the cabin, where Hope will be reading to Beth. After Steffy makes a “cha cha cha” joke and shares a quick moment with Beth, Hope will put the baby down for a nap. That’ll leave her to face off with Steffy, who’ll have some things to get off her chest.

Steffy will rant about Hope using Thomas’ feelings against him. She’ll feel like Hope manipulated Thomas into signing over joint custody of Douglas, so she’ll obviously give her rival an earful. Steffy certainly won’t approve of Hope’s decision to cover up Thomas’ “demise” either.

As for the topic of Beth, Steffy will wonder if Hope will ever be able to forgive Thomas. Hope will point out she could ask Steffy the same thing. Steffy will insist that she wants to, but she’ll stand by her claim that Thomas was manipulated by Hope. They’ll have a war of words, but Steffy will end up bailing on this argument to see Liam at Spencer Publications.

Steffy will want to see how Liam’s settling in at SP, but he’ll seem worried. The Bold and the Beautiful spoilers say Liam will open up to Steffy about her delusional brother. He’ll feel like Thomas still thinks he can worm his way into Hope’s life. Liam will assure Steffy that Hope intends to focus on their family and stay home with Beth for a while.

Over with Hope, she’ll head to Forrester Creations after being summoned by Thomas. Hope will see some new designs featured on models and hear Thomas’ pitch for her to come back full-time. Thomas will want to team up on Hope for the Future – and so will Douglas. He’ll show Mommy Hope the poster he made for Hope for the Future and push her to work with his daddy.

Hope will protest that she has to be home with Beth, but how can she say no to Douglas and those pleading eyes? The Bold and the Beautiful spoilers state that some great drama’s coming up, so don’t miss all the action. We’ll give you updates as other B&B news emerges. Stay tuned to the CBS soap and don’t forget to check CDL often for the latest Bold and the Beautiful spoilers, updates and news.