The Bold and the Beautiful Spoilers: Thursday, February 21 Update – Hope Pushes Liam to Steffy – Brooke Warns Will Lead To Divorce

BY Heather Hughes on February 21, 2019 | Comments: one comment
Related : Soap Opera, Spoiler, Television, The Bold and the Beautiful 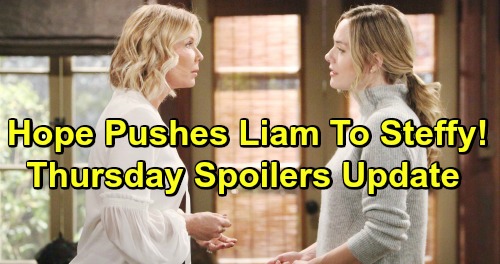 The Bold and the Beautiful (B&B) spoilers for Thursday, February 21, tease that Hope Spencer (Annika Noelle) will be stuck on the “Steam” dream. She feels like Liam Spencer (Scott Clifton) could have a blissful life with Steffy Forrester (Jacqueline MacInnes Wood) and the girls. Hope doesn’t believe she’ll ever be blessed with kids, so she thinks she’s holding Liam back from the family he deserves.

Of course, Liam could be a live-in dad if Hope stepped aside. The idea will become an increasingly appealing one to Hope, so trouble’s brewing. On Thursday’s B&B episode, Brooke Forrester (Katherine Kelly Lang) will worry that Hope’s making a terrible mistake. She’ll express concern when she realizes Hope’s pushing for “Steam” family bonding.

Hope’s clearly struggled to cope with the loss of Beth Spencer. If she piles on more pain, it could be a disaster for her broken heart. Brooke will think Hope will regret it if she drives Liam back to Steffy, but Hope won’t fear that outcome. She’ll contend that it’d probably work out well. That way Kelly and “Phoebe” would always have their daddy with them.

Liam doesn’t know he’s “Phoebe’s” biological father yet, but he’s agreed to fill that role. He wants to be there for “Phoebe” just like he is for Kelly. Steffy still feels a deep connection with Liam, so Hope could see the pieces falling into place so easily.

Despite Brooke’s advice, The Bold and the Beautiful spoilers say Hope will seriously consider a split. It won’t be long until Hope drops the divorce bomb on Liam, so he’ll end up fighting for his marriage on next week’s new B&B episodes, February 25 – March 1.. In the meantime, Katie Logan (Heather Tom) and Will Spencer (Finnegan George) will feel Bill Spencer’s (Don Diamont) love. He’ll make a huge promise that they can put their faith in.

Bill may vow to step up like never before. He could assure Katie that he’ll be the one guy who doesn’t fail her. That’s just in a friendly capacity right now, but things could change if Justin Barber (Aaron D. Spears) and Donna Logan (Jennifer Gareis) pull off their matchmaking plan.

Bill already wants to be the best father he can be. Perhaps he’ll try to be the best husband he can be one day down the road. The Bold and the Beautiful spoilers point to a “Batie” reunion, so the future looks bright for Bill and Katie.

Are you excited about the romantic shakeups ahead? We’ll give you updates as other B&B news comes in. Stay tuned to the CBS soap and don’t forget to check CDL often for the latest Bold and the Beautiful spoilers, updates, and news.