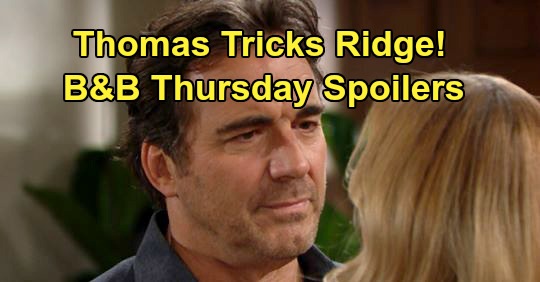 The Bold and the Beautiful spoilers for Thursday, January 2, tease that Ridge Forrester (Thorsten Kaye) will be feeling particularly hopeful. As B&B viewers know, he’s been melancholy about the state of his marriage lately, since he and Brooke Forrester (Katherine Kelly Lang) can’t seem to come to a place of agreement when it comes to his son Thomas Forrester (Matthew Atkinson). Brooke is convinced that Thomas is dangerous and unstable, and Ridge is determined to stand by and support his son.

Both Brooke and Ridge admit that they are still very much in love and want their marriage to work, but they can’t get past their disagreement over Thomas. Well, on Thursday’s episode, Ridge will apparently come to believe that Thomas has truly moved on with Zoe Buckingham (Kiara Barnes).

Of course, Thomas tends to put on a big show with Zoe whenever he thinks that people are watching, so Ridge may witness Thomas and Zoe together some more.

As B&B viewers know, Thomas invited Zoe to the Forrester Christmas dinner, so perhaps Ridge will get an eyeful of them together then. Whatever the case, Ridge will fully believe that Thomas is beyond his obsession with Hope Logan (Annika Noelle), and that will give him an idea. He’ll think that perhaps there’s hope for his marriage to Brooke, if she knows that Thomas is now with another woman and completely over Hope.

Of course, B&B viewers know that Thomas is not anywhere near being over Hope, and that his relationship with Zoe is a big ruse designed to get him closer to Hope. Thomas knew that his only real shot of working with Hope at Forrester Creations was if she was fully convinced that he had moved on with someone else, so he quickly manufactured a romance with Zoe. He got things moving quickly with Zoe and even slept with her to solidify the ruse.

Ridge is oblivious to Thomas’ ruse, just has he’s oblivious to the plan that Liam Spencer (Scott Clifton) and Steffy Forrester (Jacqueline MacInnes Wood) have in place to get Zoe to spy on Thomas and find out what’s going on in his head. But Brooke knows about Liam and Steffy’s plan, so when Ridge comes to her wanting to revive their marriage because Thomas has moved on with Zoe, Brooke isn’t going to be convinced.

And that will probably frustrate Ridge – after all, he won’t be privy to the same information that Brooke is, and Brooke won’t be able to tell Ridge about Liam and Steffy’s plot. It will be a mess, and it will likely leave Ridge frustrated and wondering what’s wrong with Brooke.

Meanwhile, on the new episode of B&B on Thursday, January 2, Hope will find herself unsettled after Thomas gives her an unexpected surprise. Exactly what he gives her remains to be seen, but it could be a Christmas present of some sort – perhaps some sort of personal gift that makes her feel uncomfortable.

As B&B viewers know, Thomas is still thoroughly obsessed with Hope even though he’s romancing Zoe. In fact, Thomas even imagined that Zoe was Hope when the two woke up together in bed after they spent the night together. We’ll see what he ends up giving Hope, but whatever it is, he’ll probably have some smooth explanation for it that will leave Hope wondering whether it really was inappropriate or whether she was just thinking the worst of Thomas.