BY Marcy Cohen on January 3, 2019 | Comments: one comment
Related : Soap Opera, Spoiler, Television, The Bold and the Beautiful 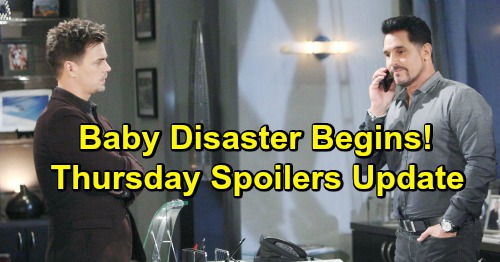 The Bold and the Beautiful (B&B) spoilers for Thursday, January 3, tease that Zoe Buckingham (Kiara Barnes) will go about her business unaware of extreme danger. She has no idea that her father’s gambling debt has put her in harm’s way.

A thug’s been threatening Dr. Reese Buckingham (Wayne Brady), but it’s not enough. If this guy wants Reese to pay what he owes, he’ll have to get more vicious.

That’s exactly what this goon will do in Thursday’s episode. The Bold and the Beautiful spoilers say surveillance pictures will be taken and sent to Reese’s cell phone. He’ll be busy getting ready for the birth of Hope Spencer’s (Annika Noelle) baby, but he’ll find time to check his texts.

Reese will be horrified when he sees the pics of his vulnerable daughter. She could be taken out at any moment!

Reese would never forgive himself if his gambling problem led to Zoe’s death. He’ll decide he has to do whatever it takes to protect his daughter, but Hope and Liam Spencer (Scott Clifton) will pay the price.

Reese has a few tricks up his sleeve and they’re sure to bring heartbreak for this B&B couple. It looks like Reese will deliver Hope’s baby and swap her with a dead one before the week’s over.

That should give him a chance to sell “Lope’s” kid for cash, so The Bold and the Beautiful fans will want to stay tuned. Until then, Liam’s only goal will be rushing to Hope’s side. He’ll try to believe he can make it before Beth’s born, but the awful weather will slow him down and leave him with doubts.

Liam’s flight to Catalina Island will bring total terror. He’ll be fearful anyway thanks to Hope’s predicament and the possibility that things could go horribly wrong.

Once the helicopter encounters some trouble in the storm, Liam will grow even more anxious. He’ll just want this whole ordeal to be over, but there’s obviously much more drama to come.