BY Heather Hughes on May 16, 2019 | Comments: one comment
Related : Soap Opera, Spoiler, Television, The Bold and the Beautiful 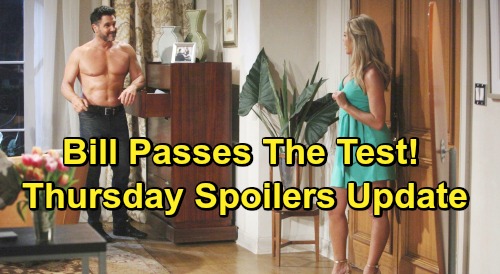 The Bold and the Beautiful (B&B) spoilers for Thursday, May 16, tease that Brooke Forrester (Katherine Kelly Lang) will grow increasingly concerned about Katie Logan’s (Heather Tom) scheme. She’s truly rooting for a “Batie” reunion, but she doesn’t believe Katie’s going about it in the right way. Brooke feels like Katie will only get hurt, so she’s bracing for a tough blow right now.

As Brooke frets on Thursday’s B&B episode, she’ll explain the situation to Donna Logan (Jennifer Gareis) and Justin Barber (Don Diamont). They’ll agree Brooke has every right to be fearful. Justin and Donna know Bill has had his fair share of hot hookups. They’ll worry it won’t take much for Bill to fall into bed with Shauna Fulton (Denise Richards), but they’ll hope for Katie’s sake that they’re wrong.

Meanwhile, Shauna will keep up the ruse. She put the seduction plot in motion, but it’s time to see if Bill will take the bait. Will Bill deepen the kiss and hit the sheets with Shauna or pull away and set some boundaries? Thankfully, Bill will prove Katie is the only one in his heart. He’ll stop Shauna’s sexy tactics and insist he’s not ready to give up on a family reunion.

The Bold and the Beautiful spoilers say a satisfied Katie will come out of hiding. She’ll explain her role in the scheme and hope Bill’s not too angry about it. Fortunately, Bill should be pretty understanding. After all, Bill has broken Katie’s heart repeatedly in the past. He’ll get why she wanted to protect it now, especially before she made the marriage leap and got Will Spencer (Finnegan George) too excited.

Speaking of that marriage leap, The Bold and the Beautiful spoilers say Katie will accept Bill’s proposal. They’ll move forward with their plans to tie the knot again, so Bill should be on cloud nine. This night will turn out a lot better than he thought! Will’s going to hear the good news by the end of the week, so that’s something else to look forward to.

It sounds like some fantastic scenes are coming up. We’ll give you updates as other B&B details emerge. Stay tuned to the CBS soap and don’t forget to check CDL often for the latest Bold and the Beautiful spoilers, updates, and news.