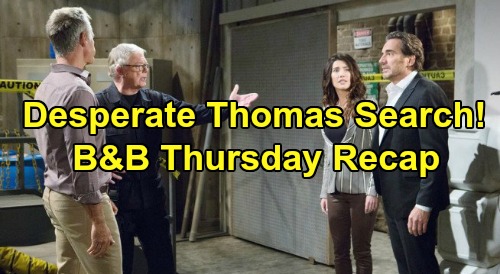 The Bold and the Beautiful (B&B) spoilers recap for Thursday, November 14, reveals that plenty of drama’s set to unfold. We should mention that due to impeachment hearing coverage, B&B delayed the episode meant for Wednesday, November 13. They pushed it to Thursday, so let’s talk about what’s about to go down.

First, there’ll be questions about missing Thomas Forrester (Matthew Atkinson). Ridge Forrester (Thorsten Kaye) will work with a model at Forrester Creations, where Steffy Forrester (Jacqueline MacInnes Wood) will join him. She’ll comment on Thomas’ design and tease that the student may catch up with the master.

However, Ridge will be baffled by Thomas bailing on the fitting. He’ll mention that he didn’t see Thomas or Douglas Forrester (Henry Joseph Samiri) at the mansion earlier, but he got confirmation that Douglas made it to school. Steffy will also bring up her texts to Thomas, which went unanswered.

After Steffy and Ridge ponder Thomas’ whereabouts, they’ll be summoned down to see the vat cleanup in progress. Jake Maclaine (Todd McKee) and Charlie Webber (Dick Christie) will offer reassurance that the job’s almost done. Steffy will be uneasy about the fact that they had lethal acid on site. Ridge just won’t want anyone getting hurt, so he’ll be glad everything’s being taken care of.

Next, Ridge and Steffy will discuss Thomas again. This time Ridge will swing the conversation to the custody papers and how Hope Logan’s (Annika Noelle) pressuring Thomas. Ridge will worry Hope isn’t going to rest until she gets Thomas’ signature. He’ll pick up the phone to call Thomas, but he’ll just end up having to leave a voicemail.

Other Bold and the Beautiful spoilers say Hope will remain a mess over what she’s done. She’ll be haunted be flashbacks of that deadly night and will text Thomas repeatedly with no reply. Brooke Forrester (Katherine Kelly Lang) will talk to Hope for a moment before Liam Spencer (Scott Clifton) walks in. It won’t take Liam long to realize Hope is deeply troubled.

After Liam pushes Hope to tell him what happened, Hope will admit Thomas signed the papers and gave her shared custody. She’s now Douglas’ mother, so Liam will think this changes things for all parties involved. There’s no escaping Thomas now, and Liam will be concerned about leaving Hope to get stalked at Forrester Creations. He’ll point out that he’s resigning at FC to rejoin Spencer Publications, but Hope’s news will make him worry about that choice.

Brooke will assure Liam that everything will be fine. She’ll think Hope did what was best for Douglas and it’ll all work out. Liam still won’t think Hope is all right, but he’ll take off anyway. Once they’re alone again, Hope will once again have an emotional outburst. She’ll insist she can’t lie to Liam and note that Thomas won’t be a problem like Liam suspects. Thomas can’t be a problem if he’s dead – and Hope will blame herself for that.

Brooke will do what she can to settle Hope down, but Hope will just keep replaying the horror in her mind. She’ll cry about the fatal shove and suggest the guilt’s eating at her like the acid that killed Thomas. The Bold and the Beautiful spoilers say Hope will ultimately make a shocking declaration. She’ll determine that she has to confess to Ridge, but that plan won’t work out like she expects.