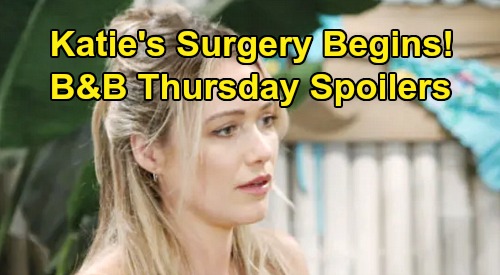 The Bold and the Beautiful spoilers for Thursday, October 10, tease that the life-saving transplant surgery for Katie Logan (Heather Tom) will get underway. As B&B viewers know, Flo Fulton (Katrina Bowden) has just discovered that she’s a compatible kidney donor for Katie, and she’s decided to go through with the surgery and give Katie the gift of life.

Of course, this came after some seriously scary moments for Katie, whose body is seriously weakened and has been on the verge of giving out completely. Her kidney failure was particularly dangerous due to her status as a heart transplant recipient, and her heart simply couldn’t take the sustained dialysis or the stress of her failing kidneys.

On Thursday’s episode, Flo will prepare for surgery with her mother Shauna Fulton (Denise Richards) by her side. Since Flo wanted to remain an anonymous donor, Katie and her family won’t know where the donor kidney is coming from, and that’s probably a good thing for the time being. They really just need to focus on Katie and how she’s going to come through the surgery, rather than dealing with the inevitable drama that will occur when Flo’s status as the donor comes to light.

Watch for the Logans, the Forresters, and the Spencers to come together at the hospital during the surgery, while Shauna waits in a separate area as her daughter gives an amazing gift in total secrecy.

Meanwhile, on the new episode of B&B on Thursday, October 10, Wyatt Spencer (Darin Brooks) and Sally Spectra (Courtney Hope) will have a little adventure together. While Hope Logan (Annika Noelle) and Liam Spencer (Scott Clifton) are at the hospital waiting during Katie’s surgery, Wyatt and Sally will babysit Beth Spencer (River Davidson and Madeline Valdez) and Douglas Forrester (Henry Joseph Samiri) at the cabin.

It should be a rewarding experience for the couple, as they explore new territory in caring for a couple of active youngsters. Of course, now that Sally and Wyatt are engaged, they might just have a little talk about the possibility of having a family of their own someday. The whole experience of babysitting may get them thinking about what life would be like with kids of their own.

At any rate, there should be some cute scenes as they try to navigate caring for a baby and the precocious Douglas. It will be interesting to see who changes the diapers, if indeed that situation arises, and the fun that “Wally” have as they get out of their comfort zone.