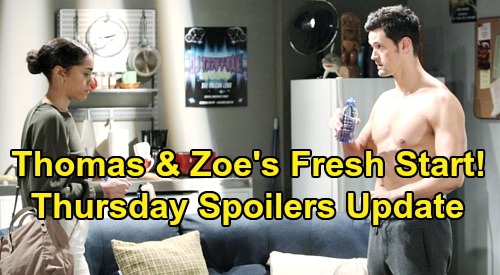 The Bold and the Beautiful (B&B) spoilers update for Thursday, October 17, tease that Steffy Forrester (Jacqueline MacInnes Wood) will get a wonderful surprise. She’ll be over the moon when Liam Spencer (Scott Clifton) drops by with Beth Spencer (River Davidson and Madeline Valdez) for a visit. He’ll be doing this on the down low since Hope Logan (Annika Noelle) won’t be privy to his whereabouts.

Nevertheless, Liam will just focus on Steffy for a while. He’ll worry that she’s been feeling left out, so he’ll hope to give her some quality Beth time. The Bold and the Beautiful spoilers say Steffy will play with Beth and give her some cuddles, so this visit should be bittersweet. As much as Steffy will adore hanging out with her former daughter, it’ll remind her of just how much she’s lost.

Of course, Beth was never legally Steffy’s adopted child, but she was raised “Phoebe Forrester” for months. Steffy thought she’d be taking care of little “Phoebe” forever, so it was brutal having her ripped away. She understands Beth had to be returned to her rightful mother, but that doesn’t change the pain she endured.

Steffy will open up to Liam about that pain and talk about what might’ve been. Part of her will wonder if there’s still hope for them as a couple, but she may catch herself and backtrack. Regardless, Liam will see that Steffy is hurting. He’ll make it clear that he’s always going to support Steffy, even if they aren’t together. Liam will vow to do everything he can to keep Beth in Steffy’s life as well, so she’ll express her gratitude.

Other B&B spoilers say Thomas Forrester (Matthew Atkinson) will have an interesting run-in. He’ll be taken aback when he spots Zoe Buckingham (Kiara Barnes) in Vincent “Vinny” Walker’s (Joe LoCicero) building. Thomas will try to chat with Zoe, but that may bring some tense moments. Zoe isn’t a big fan of Thomas since he went around barking orders and delivering fierce threats.

The baby swap secret became a total nightmare thanks to Thomas’ involvement. Zoe will feel like things would’ve turned out differently if Thomas hadn’t been so fixated on Hope. However, Thomas will want to concentrate on the present and the future. He’s trying to distance himself from the chaos surrounding Beth, but Zoe may admit her world’s still in shambles.

Zoe was fired and is probably strapped for cash right now. She may put some of the blame on Thomas, but he’ll still be intrigued by Zoe’s beauty and feisty nature. The Bold and the Beautiful spoilers say Thomas will use Zoe as his inspiration next week. He’ll design a line with Zoe in mind, so he’ll undoubtedly have big plans for her soon.

It sounds like some great scenes are on the way. We’ll give you updates as other B&B news comes in. Stay tuned to the CBS soap and don’t forget to check CDL often for the latest Bold and the Beautiful spoilers, updates and news.