BY hellodrdavis on September 25, 2019 | Comments: one comment
Related : Soap Opera, Spoiler, Television, The Bold and the Beautiful 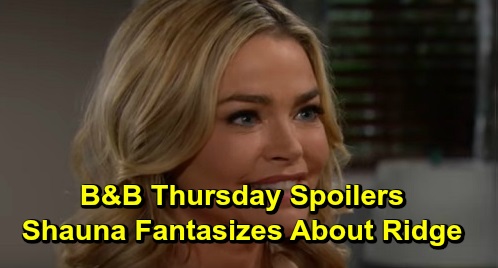 The Bold and the Beautiful spoilers for Thursday, September 26, tease that Ridge Forrester (Thorsten Kaye) will make an astonishing discovery. He’ll find his son Thomas Forrester (Matthew Atkinson) making an unsupervised visit to Douglas Forrester (Henry Joseph Samiri), which will be a big no-no. As B&B viewers will remember, Thomas manipulated and used Douglas in his quest to get Hope Logan (Annika Noelle) to marry him, and that has left the other adults in Douglas’ life very protective of him.

Douglas has been staying with Ridge and Brooke Forrester (Katherine Kelly Lang) and spending a lot of time with Hope and Liam Spencer (Scott Clifton) down in the cabin. They’ve been bonding and slowly becoming a close-knit family along with Beth Spencer (River Davidson and Madeline Valdez). That seems to be the way that everyone wants things to be for now…everyone except for Thomas.

Exactly how Thomas sneaks his way into seeing Douglas remains to be seen, but it certainly looks like he’ll get his visit with the little boy. Douglas will probably be thrilled to finally see his dad, and the feeling will surely be mutual. But Ridge won’t be thrilled when he finds his son breaking the rules so soon after being released from the hospital. The two will surely have words, and it looks like Thomas will probably have an excuse or two.

Of course, whether Ridge buys Thomas’ excuses remains to be seen. But one thing’s for sure – the whole situation will put Ridge in a tough position, since he’ll know that Brooke would absolutely explode if she knew that Thomas were seeing Douglas. Brooke has stated on several occasions that she doesn’t want Thomas anywhere near Douglas, so we’ll see if Ridge ultimately tells Brooke about finding Thomas and Douglas together.

Meanwhile, on the new episode of B&B on Thursday, September 26, Flo Fulton (Katrina Bowden) will find herself growing frustrated. She suffered a major blow when she heard from Sally Spectra (Courtney Hope) that Sally and Wyatt Spencer (Darin Brooks) are engaged. And now her mother Shauna Fulton (Denise Richards) will be another source of friction for her.

As B&B viewers know, Shauna recently spent the night with Ridge in the bedroom above Bikini Bar. Nothing between them happened except for a kiss that Shauna stole from an unconscious Ridge, but that seemed to be enough for her to become quite infatuated with him. B&B viewers will remember that Shauna came home from that night on a total high, gushing about how she had spent the night with Ridge and how wonderful it was.

Well, it seems that Shauna will continue to gush about her evening to Flo, which will prove irritating to Flo. Of course, Flo will also be reeling from the news about Katie Logan’s (Heather Tom) kidney failure, and she probably won’t want to deal with her mom’s fantasies about having a future relationship with Ridge. But something tells us that Shauna will persist with her fantasies, since she seems determined pursue the man.