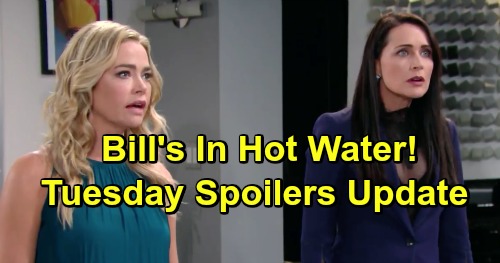 The Bold and the Beautiful spoilers for Tuesday, April 9, tease that it will be quite the scene as Bill Spencer (Don Diamont) gets confronted by both Shauna Fulton (Denise Richards) and Quinn Forrester (Rena Sofer) at the Forrester offices. Shauna’s just made a shocking accusation…that Bill is Florence “Flo” Fulton’s (Katrina Bowden) father! It’s a revelation that temporarily left Bill and Quinn utterly speechless.

But as Bill thinks on the matter a little further, he’ll become convinced that Shauna’s lying. The Bold and the Beautiful spoilers say that he’ll go into defensive mode and start hurling accusations at Shauna, accusing her of being a scam artist who is after his vast fortune.

Of course, this won’t go over well with Shauna, who clearly dislikes Bill. It looks like we can expect a major argument between these two over Shauna’s motives.

Of course, Shauna’s real motive at this point involves her daughter. Flo and Wyatt were a couple back in high school, and now it seems that they could very well be half-siblings. Shauna will surely want to find out for sure whether the two are actually related and prevent them from getting together down the road if in fact they are half-siblings.

B&B spoilers also say that Quinn will be motivated to find out if what Shauna is saying is actually true as well. Quinn will probably go through a range of emotions wondering if her son actually dated his sister, and she’ll likely have some questions for both Bill and Shauna regarding their past. She’ll press them for information and try to make sense of it all.

Meanwhile, on the new episode of B&B on Tuesday, April 9, Hope Spencer (Annika Noelle) will spend some more time with Flo. Hope really feels for Flo, since she believed that Flo selflessly gave up her baby for adoption to Steffy Forrester (Jacqueline MacInnes Wood).

Of course, in reality, Flo didn’t give birth and was part of Reese Buckingham’s (Wayne Brady) baby switch and adoption scam, but Hope doesn’t know this.

On Tuesday’s episode, Hope will decide to do something helpful for Flo. She’ll arrange for Donna Logan (Jennifer Gareis) to meet Flo as a kindred spirit. Donna once gave a baby up for adoption, so Hope will think that Donna will understand everything that Flo is going through.

The Bold and the Beautiful spoilers say that Donna will impart wisdom and advice to Flo on that front.

Of course, all of this will probably make Flo feel increasingly guilty about the secret she’s keeping from Hope. She’ll feel bad that Hope is going to all of this trouble to ease her burden, when she’s helping to keep Hope’s baby from her. Flo knows that Hope is suffering terribly due to the loss of her baby, and the whole experience with Donna will be quite stressful.