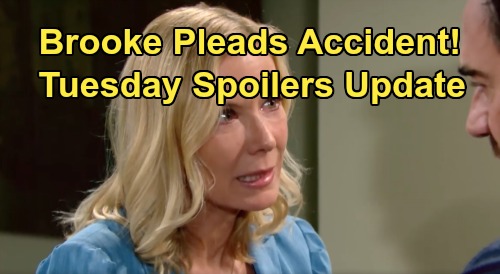 The Bold and the Beautiful (B&B) spoilers update for Tuesday, August 27, tease that Hope Logan (Annika Noelle) will fear the worst. She’ll await news on Thomas Forrester’s (Matthew Atkinson) condition, which will give her time to battle guilt. Hope’s mind will replay the tense scenes that led up to Thomas’ tumble, so she’ll second-guess her decisions and wish things could’ve been different.

At the hospital, Hope will worry Thomas may not survive the fall. She’ll blame herself for not letting Thomas make his spiel inside and putting him by the cliff’s edge instead. Hope will hate that Thomas is now fighting for his life while her mom’s facing accusations. She’ll sense that this could cause real trouble for Brooke Forrester (Katherine Kelly Lang) and Ridge Forrester (Thorsten Kaye), so that’ll make her guilt even worse.

However, Liam Spencer (Scott Clifton) will stay by Hope’s side and try to ease that guilt. As far as Liam’s concerned, Thomas is the only one in the wrong here. He’ll remind Hope of Thomas’ unhinged behavior recently and assure her there was a legitimate reason to be afraid. Liam won’t think Hope should blame herself for trying to get away, and he won’t think Brooke should be blamed for her role in this either.

Liam will insist Brooke had every right to defend Hope from Thomas. He would’ve done the same in Brooke’s position. Hope will still fret about Thomas potentially not surviving his injuries. She won’t know how poor Douglas Forrester (Henry Joseph Samiri) could face another blow like that, but she’ll hold out hope he won’t have to. The poor kid doesn’t deserve to lose his only remaining parent.

Other Bold and the Beautiful spoilers say Ridge will remain furious with Brooke. In fact, he’ll grow angrier by the second! Ridge already snarled that his son may be dead because of Brooke. He’ll escalate the conflict by insisting she pushed Thomas on purpose.

An appalled Brooke will deny it, but Ridge won’t buy her side of the story. He’ll think she just wanted Thomas gone for good. B&B fans can expect some major “Bridge” drama before Dr. Jordan Armstrong (Vincent Irizarry) offers updates. Unfortunately, there may not be anything positive to report yet.