BY Heather Hughes on August 6, 2019 | Comments: one comment
Related : Soap Opera, Spoiler, Television, The Bold and the Beautiful 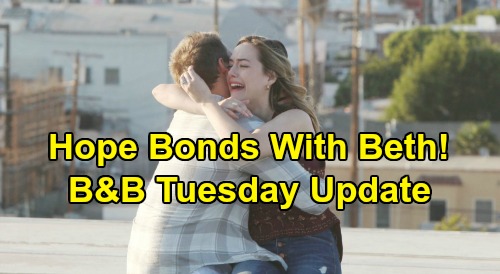 The Bold and the Beautiful (B&B) spoilers update for Tuesday, August 6, tease that Florence “Flo” Fulton (Katrina Bowden) will have another confession to make. She already told Liam Spencer (Scott Clifton) and Wyatt Spencer (Darin Brooks) the truth, but it’ll be Ridge Forrester (Thorsten Kaye) and Brooke Forrester (Katherine Kelly Lang) who hear it next. An appalling shocker is headed their way!

Brooke and Ridge will be horrified when they learn Flo lied about being pregnant. She’ll admit she posed as “Phoebe Forrester’s” (River Davidson and Madeline Valdez) birth mother and got caught up in a scheme she regrets deeply. Flo never had a baby at all, so it won’t take long for rage to ignite. Brooke will be livid with Flo for letting Hope Forrester (Annika Noelle) grieve an unnecessary loss for months.

Ridge obviously won’t be happy about that either, but his mind will soon drift to Steffy Forrester (Jacqueline MacInnes Wood) and the heartbreak she’s set to endure. He’ll realize Flo’s deception is going to blow his daughter’s world apart. Ridge will be appalled once he determines Steffy will have to give her up beloved “Phoebe.”

The Bold and the Beautiful spoilers say there’ll be more anger from “Bridge” later this week. Zoe Buckingham (Kiara Barnes) and Shauna Fulton (Denise Richards) still need to be grilled, so Brooke and Ridge will have additional fury to unleash. In the meantime, Liam and Hope will enjoy a reunion they never thought possible. They’ll be reunited with the baby girl they believed was gone forever!

Beth Spencer is thankfully alive and well, so she’ll get lots of love from her parents on Tuesday. B&B fans can expect some powerful moments as Hope and Liam cry over their precious daughter. The Bold and the Beautiful spoilers say they’ll come together with little Beth and savor this long-awaited happiness.

Of course, “Lope’s” happiness will bring total heartbreak for Steffy Forrester (Jacqueline MacInnes Wood). She’ll eventually come home to confirmation that “Phoebe” is indeed Beth, so things are about to heat up. That’s terrible news for Steffy, but it’s excellent news for drama lovers! We’ll give you updates as other B&B details emerge. Stay tuned to the CBS soap and don’t forget to check CDL often for the latest Bold and the Beautiful spoilers, updates and news.