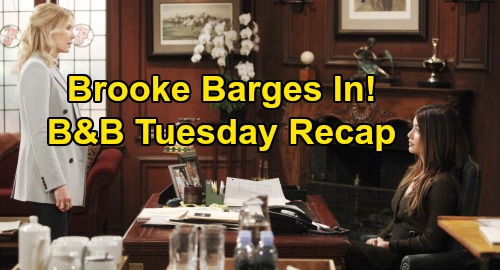 The Bold and the Beautiful spoilers recap for Tuesday, December 24, tease that Hope Logan (Annika Noelle) fielded questions from Brooke Forrester (Katherine Kelly Lang) at Brooke’s place. Brooke quizzed Hope about the wisdom of her working with Thomas Forrester (Matthew Atkinson) on her line. Brooke was completely skeptical about Thomas’ sudden interest in Zoe Buckingham (Kiara Barnes), but Hope said that it seemed real but that her eyes were open.

Thomas left, then Carter Walton (Lawrence Saint-Victor) came in and spoke with Zoe, wondering if the rumors were true and that she was romantically involved with Thomas. She confirmed it, and she stated that while she and Thomas had both made horrible mistakes, they’d both grown and changed. Carter seemed skeptical about the notion of Thomas changing.

In the CEO office, Steffy, Ridge Forrester (Thorsten Kaye), and Eric Forrester (John McCook) listened as Thomas said that he had something to say. He expressed his gratitude to his family for allowing him a second chance and said that he knew they had doubts but was thankful for their support. Steffy wanted to know if he was really over Hope, and he assured her and all of them that he is no longer fixated on Hope and that he’s moving forward with Zoe.

Ridge seemed to immediately embrace the “changes” in Thomas, but Steffy was still skeptical. Thomas then asked her not to listen to what he says, but to watch what he does, and that he wouldn’t let them down.

Afterwards, back in the design office, Hope arrived to find Zoe there. Hope was chilly to Zoe, whom she still blames for the Beth Spencer (River Davidson and Madeline Valdez) secret. But Hope did take the opportunity to quiz Zoe about her relationship with Thomas, asking her how real it all was. Zoe said she was truly interested in Thomas and that he fascinated her in a good way.

Thomas then walked in and told Hope that he had just met with Steffy, Ridge, and Eric, and that he wanted to say again that he’s sorry for what he’s done in the past, but that he’s grateful that they’re co-parents to Douglas Forrester (Henry Joseph Samiri) and that they’re working together now. He promised a skeptical Hope that he’s moving forward with Zoe and that he wouldn’t let her down.

Finally, Steffy was alone in the CEO office when Brooke barged in wondering how Steffy could rehire Zoe back at Forrester Creations. Steffy said that Zoe’s return wasn’t what it appeared to be, but that she rehired Zoe because “we need her.” She then told Brooke about how Liam Spencer (Scott Clifton) had a plan to use Zoe as a spy to find out what Thomas is really up to.

Brooke heard all the details about how Liam and Steffy found Zoe at Vinny Walker’s (Joe LoCicero) apartment and how she agreed to spy on Thomas in return for getting her job back. Brooke voiced her suspicion about Thomas having true feelings for Zoe, and Steffy said that she hoped his feelings were genuine, for both Thomas and Hope’s sake.